The Shield-back Spider has been written about before by NACC, but we decided to promote this species once again as a fitting tribute to the world’s oldest spider (Gaius villosus), known only as #16, who died recently at the age of 43. This is a great story about #16 – who lived her life in a burrow in a nature reserve just southeast of the NACC NRM region – recently published in The Washington Post: https://www.washingtonpost.com/news/speaking-of-science/wp/2018/05/01/the-extraordinary-life-and-death-of-the-worlds-oldest-known-spider/?noredirect=on&utm_term=.7e79d1b5abdb. G. villosus is not a threatened species, however it is easily confused with those that are, such as the Shield-back Spider (I. nigrum).

The Shield-back Spider is dark brown to black and large, with females growing up to 30mm in body length. It has a distinctive thick and hard cuticle on the abdomen and the end of the abdomen is flattened into a shield with deeply corrugated sides. 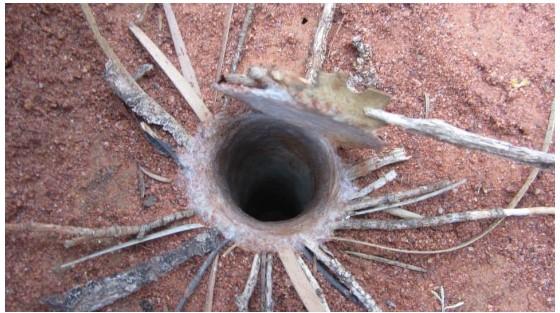 The Shield-back Spider is endemic to semi-arid areas of Southwest Australia. It occurs in a number of severely fragmented populations in the central and northern WA Wheatbelt. Further north, the species occurs in more arid areas in the Northern Agricultural Region (NAR) such as large isolated ranges at Jack Hills, Weld Range and Blue Hills, and coastal areas of the NAR, for example, Zuytdorp Station north of the Murchison River.

The Shield-back Spider typically inhabits clay soils of eucalypt woodlands and acacia vegetation, and relies heavily on leaf litter and twigs to build its burrow.

The Shield-back Spider is well-adapted for life in semi-arid habitats. It lives in burrows that are tubular and approximately 20–30cm deep. The burrow is deep enough to ensure that air in the lower burrow remains humid and relatively cool in summer. The burrow has a lightweight trapdoor of leaf-litter and silk, with a fan of leaf and twig trip-lines attached to the burrow rim. Movement of a trip-line alerts the spider waiting in the entrance of the burrow to the presence of prey, which is primarily ants, but also includes beetles, cockroaches, millipedes and moths.

Females spend their entire life in the burrow or within its proximity. Gene flow is therefore facilitated by male biased dispersal, estimated to be less than 500m, as only males leave their burrows in search of females. The species aestivates (becomes dormant) during the drier months of the year, from November to February.

The Shield-back Spider is threatened by land clearing, which has had a severe impact on the populations in the central and northern Wheatbelt. It is also threatened by salinisation, which affects low-lying remnant vegetation. The saline water kills the plants and therefore affects the spiders, which rely on the vegetation and associated leaf-litter for habitat. Grazing by stock and feral animals, such as goats and rabbits, also threatens the species, as it causes deterioration of the leaf litter and hence the habitat that the spiders dwell in.

Information Source: Government of Australia, Department of Environment and Energy; and WA Department of Biodiversity, Conservation and Attractions (inc. Florabase).