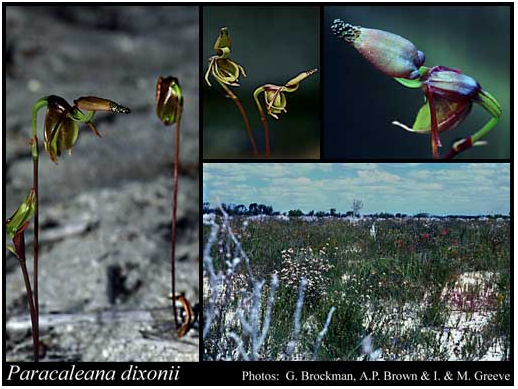 The Sandplain Duck Orchid is a terrestrial orchid growing to 18cm tall. It has a linear leaf, 2-3cm tall and 4-6mm wide, with one or two green-brown flowers, 20-25mm long and 12-16mm wide. Flowering occurs much later than other associated orchids, from October to January, with flowering being more profuse after summer fire. By the time of flowering, the leaf is often dry and withered due to the hot summer temperatures. By producing a nutrient rich, fleshy stem, this species is able to cope with these harsh summer conditions.

The Sandplain Duck Orchid is endemic to Western Australia and is currently known from eight populations in Arrowsmith, Eneabba, and south to Jurien Bay. Five of these populations occur on nature reserves, two occur in national parks, and one is on private property. There is estimated to be 57 mature plants occurring over approximately 540 square kilometres.

The Sandplain Duck Orchid grows in deep sand in open areas beneath dense, tall shrubs with scattered banksias, or in heathland in shallow sand over laterite.

The main threats to the Sandplain Duck Orchid are fire, land clearing for mining activities, road works, and railway and power line maintenance. Although fire plays an important part in the flowering of the species, burning may be detrimental if it occurs during the growing period (May to December). Dieback (Phytopthora cinnamomi) is also a potential threat to the Sandplain Duck Orchid as the species susceptibility to dieback is unknown, but thought to be low, however dieback hygiene procedures are advised to be carried out at all populations.