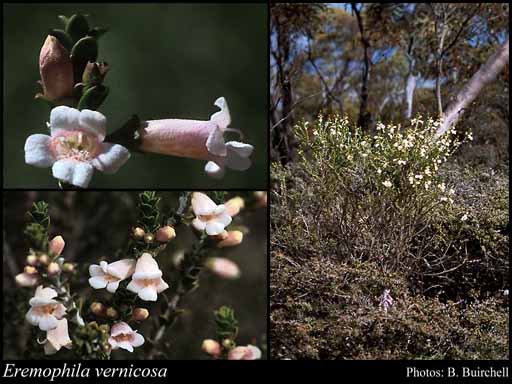 The Resinous Poverty Bush is an erect, spreading shrub that grows up to 50cm high. It has elliptical dark green leaves that are thickened and glossy. Flowering can occur between July to September, and its tubular flowers can range in colour from pinkish-white to lilac-blue.

The Resinous Poverty Bush was thought to be extinct until it was rediscovered in 1999. It is endemic to Western Australia and is currently known from two populations in the central wheatbelt, approximately 20km east of Marchagee in the Northern Agricultural Region. The total area of occupancy for the Resinous Poverty Bush is less than 0.2 square kilometres, with one population occurring in a 45 acre fenced parcel of remnant vegetation, and the other occurring on a shire road verge.

The general ecology of the Resinous Poverty Bush is largely unknown, and research would be required to determine the species’ response to fire and soil disturbance, weed invasion, grazing and its susceptibility to disease.

Current threats to the Resinous Poverty Bush are unknown. As the smaller population occurs on a shire road verge, road maintenance and weeds may be a potential threat. Habitat destruction and clearing are also potential threats to populations which do not occur in secured tenure areas, such as nature reserves. The larger, fenced population may become threatened if there was a change to management or ownership which allowed grazing or habitat destruction.