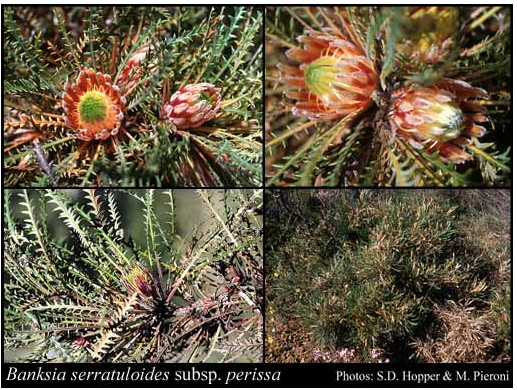 The Northern Serrate Dryandra is a low, compact shrub, growing to 1m tall and 1.2m in diameter, with crowded leaves on erect branches. The leaves are 19cm long and are paler on the underside. They are divided almost to the midrib forming 20–33 long flat lobes which are quite rigid. The flower heads are held in the leaf axils and are axillary, surrounded by lanceolate bracts. These bracts are hairless on the back and have white woolly margins, which later become smooth. The yellow flowers are about 2.5cm long and have a silky-hairy perianth. The long, hairless style has a narrow, furrowed, darker coloured stigmatic end. Flowering occurs from August to September.

The main potential threats to Northern Serrate Dryandra include dieback caused by the root-rot fungus Phytophthora cinnamomi, inappropriate fire regimes (including inappropriate prescribed burning), drought, roadwork, mining, land clearing, gravel extraction, firebreak maintenance and weeds. The response of this subspecies to fire is currently unknown and fire should be restricted until an appropriate regime is identified. Due to the locality of some populations on road verges, roadwork or other activities may adversely affect this subspecies.