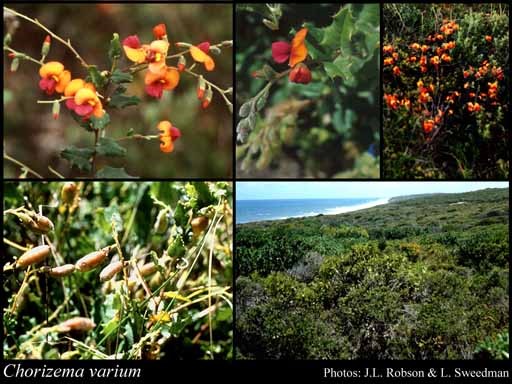 Limestone Pea (also known as Bush Flame Pea) is an erect, spreading shrub with long, hairy branches. The greenish-grey leaves are about 40 mm long and 30 mm wide, broadly ovate to cordiform, arranged alternately, and have regularly serrated margins. The leaves are hairless or slightly hairy above, with coarse veins, and hairy beneath. The leaves have petioles 1–2 mm long with stipules 2–2.5 mm long.

The pedicels are 2–5 mm long, with ovate shaped bracts 1.5–2 mm long and narrowly ovate bracteoles 1–1.5 mm long attached close to the base of the calyx. The inflorescences are erect, with many densely clustered reddish-yellow flowers on the ends of the branches. The calyx is 5–6 mm long, covered with spreading, short brown hair and has five lobes; the upper lobes are united with acute tips. The corollas, 11– 14 mm long and 13–17 mm wide, are depressed-ovate shaped. The stamens have filaments 2.5–4 mm long and versatile anthers about 3 mm long. The stigmas are oblique and the ovary is covered with dense, white hairs.

Flowering occurs from September to October. The nearly stalk-less leaves, which may vary from a round heart shape to oval, are unlike other members of the pea family found in similar habitats.

Limestone Pea is endemic to WA and is known from five populations occurring near Seabird in the Northern Agricultural Region. Three populations occur on unallocated crown land, one pastoral lease and one private land. In 1902, the species was collected in a small area near Perth and Fremantle, but this area has since been cleared and built upon. The extent of occurrence for this species is estimated to be 5.1 km2. It is difficult to determine the area occupancy due to insufficient data.

Limestone Pea is known to grow on low coastal heath in shallow soil over limestone, in association with other shrubs that include Grevillea spp., Melaleuca spp., Scaevola crassifolia and Lechenaultia spp.

Information Source: Government of Australia, Department of Environment and Energy; and Department of Biodiversity, Conservation and Attractions.