#ThreatenedSpecies of the Week: Leucopogon marginatus 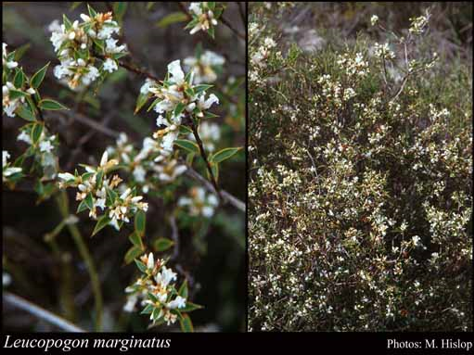 Leucopogon marginatus is an erect shrub to 1.3 m high with smooth young growth and smooth stems. This species of Leucopogon is distinguished from others by the crisp undulate and membranous margins of the leaf and the white bearded flowers that appear in the upper leaf axils in groups of 1 to 3 per leaf axil. The lance-like leaves are 4 – 6 mm long, concave, dark green, overlapping and embrace the stem, with longitudinal ridges in the lower portions. At the base of each flower is a bracteole, one third as long as each of the five sepals. The corolla forms a tube slightly longer than the calyx.  The  flowering period is from May to August.

Leucopogon marginatus is endemic to Western Australia, where it is known from 26 populations over a range of 100 km from the east of Geraldton to the Arrino sandplains. It was first discovered near Arrino in 1903, from where it was not rediscovered until 2005 during surveys for the Department of Environment’s Biodiversity Hotspot Project.  The species is recorded from white, pale yellow, yellow or grey-brown sand over laterite in the 300 – 400 mm rainfall zone. It occurs in open scrub or dense low heath with Allocasuarina humilis, A. campestris, Jacksonia nutans, Banksia scabrella, B. fraseri, Hakea spp., Grevillea spp., and Melaleuca.

The main potential threats to Leucopogon marginatus include inappropriate fire regimes, vegetation clearing, grazing by domestic livestock and rabbits, edge effects, maintenance of roads, fencelines, firebreaks and powerlines, and gravel extraction. Members of the Ericaceae family are killed by fire and are re-seeders. In 2000 L. marginatus was recorded from an area that was burnt in 1996, suggesting that it regenerates successfully from seed after fire and that mature flowering individuals are present within four years.