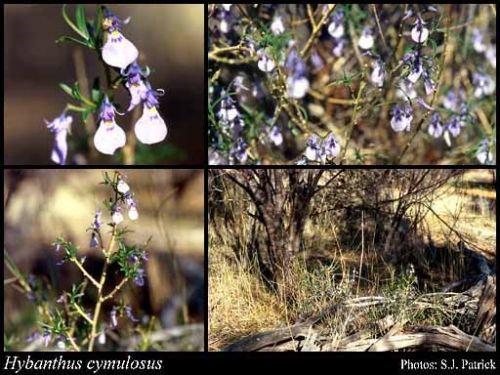 Hybanthus cymulosus, is better known by its common name of Ninghan Violet. It is listed as Critically Endangered under the Commonwealth Environment Protection and Biodiversity Conservation Act 1999 (EPBC) and as Declared Rare Flora under the Wildlife Conservation Act 1950.

The Ninghan Violet is endemic to Western Australia, it has a very restricted geographic distribution and is known from only seven subpopulations in the Mt Singleton area, approximately 380 km south-east of Geraldton. The species’ distribution is fragmented with considerable distance between each of the sub-populations. The total population size is approximately 450 mature plants (but may be as high as 600 mature plants), based on the last counts undertaken in 2002-03.

The species occurs on pastoral leases. The seven subpopulations of the Ninghan Violet do not occur on protected or reserved land, nor are they protected under any conservation covenants with landholders. However, one pastoral station (where the species is known to occur) has changed ownership to a private conservation group that aims to manage the area for conservation purposes.

The Ninghan Violet is found along drainage lines and gullies in red clay loam in a rocky doleritic area. It grows in tall shrub-land with Allocasuarina and Acacia species. All subpopulations occur high in the landscape on a range of hills in the Mt Singleton area.

The Ninghan Violet is an erect perennial herb that can grow to 0.9 m high. Flowers are blue to purple and the flowering period is from May to July. Little is known about the levels of flower and fruit production, or the pollinating mechanism of the species.

The main identified threat to the Ninghan Violet is grazing, with grazing by sheep and feral goats creating the most serious threat affecting the long-term survival of this species. Wildfire may be a potential threat to the Ninghan Violet. While the effects of fire on the species are unknown, fire that is too frequent is likely to kill plants before they reach maturity, as well as degrade the surrounding habitat.