Leucopogon obtectus (commonly known as Hidden Beard Heath)  is an erect, open shrub growing to about 1.5 m tall with a few long, erect branches that are completely covered by the foliage.

Leucopogon obtectus has stalkless, concave, rigid leaves are about 1 cm long and 1 cm wide and have fine lines. They are also a pale bluish-green colour, broadly heart-shaped (to ovate or orbicular), end in a small sharp point, and overlap along the stems.

Flowers are creamy-yellow, very small, borne 2 or 3 together on very short peduncles arising singly from the lead axils and not projecting beyond the leaves. Each flower has 6 petals, united to form a tube towards the base. Five of the petal lobes spread outwards to show the dense hairs on the inner surface. Five stamens alternate with the petals. Smooth green egg-shaped fruits hold a single seed. 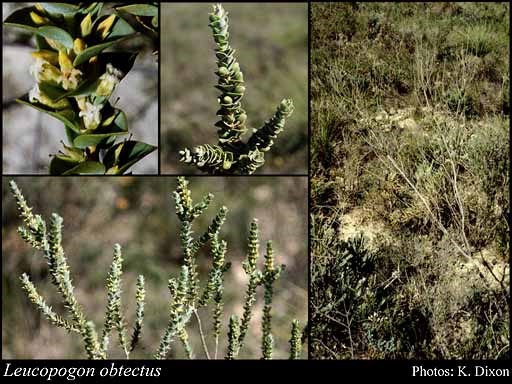 The main distribution of Leucopogon obtectus is north-west and south-east of Eneabba over a range of about 30 km. Generally the species is found as small, scattered groups in low, open heath on the crests and upper slopes of sand dunes, or more rarely in interdunal swales in grey-white or pale yellow sand. The taxon is generally taller than the surrounding low heath. It grows in association with Banksia hookeriana, B. menziesii, B. candolleana, Calothamnus sanguineus and Hakea sp.

Sadly it is currently listed as ‘Endangered’ under both the Environment Protection and Biodiversity Conservation Act 1999 (EPBC Act) and under the Western Australian Wildlife Conservation Act 1950.  The main threats are degradation of habitat (largely through mining and exploration), inappropriate fire regimes, lack of appropriate disturbance, road and rail maintenance.

Leucopogon obtectus is a relatively short lived disturbance opportunist in that it is killed by fire, regenerating from seed rather than resprouting from lignotuberous/perennial root stock. It is therefore likely that, in common with most other Australian Epacridaceae, L. obtectus recruits only from seed stored in the soil.

It has been suggested that a certain period of seed ageing may be required to break down the hard seed coat and initiate germination. Few L. obtectus seedlings have been observed amongst mature living plants. The species is thought to be both insect and bird pollinated.

The generic name Leucopogon is derived from the Greek leucos (white) and pogon (beard) and refers to the white bearded corolla lobes found on all species. The species name obtectus, is derived from the Latin obtego (to cover, conceal, protect), referring to the complete covering of the branches by the overlapping leaves.