#ThreatenedSpecies of the Week – Eucalyptus recta 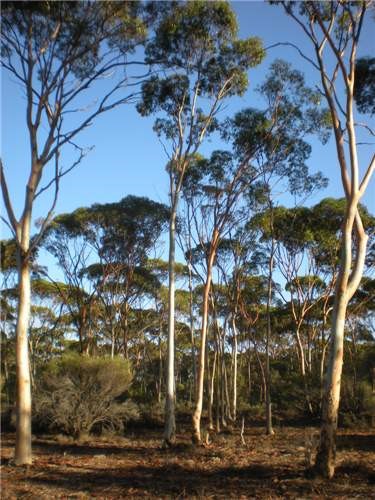 Eucalyptus recta belongs to the Myrtaceae family and is a native tree that can grow to 15 metres in height, with a straight trunk to approximately 5 metres. The species is readily distinguished by its smooth, shining pale silver-grey or white bark. It also features large buds (22-25mm long, 8-9mm diameter) which are broadly shallowly ribbed, and large fruits (8-9mm long, 10-12mm diameter).

The total population size of the species is approximately 3,500 mature plants. This figure was calculated using actual and estimated counts during population monitoring. The species occurs on gravel rises and gravelly sands on slopes with Blue Mallet (Eucalyptus gardneri) and Salmon Gum (Eucalyptus salmonophloia) in the Cadoux area, and with the Salmon Gum in the Wongan Hills area.

The main identified threats to the species are stock grazing and trampling, wildfire, chemical drift from agricultural properties, competition from weeds, road and firebreak maintenance, and grazing by insects. Past threats to the species include the clearing of land for agriculture, including possibly being subject to timber-cutting for fence posts.

Information Source: Government of Australia, Department of Environment and Energy and Department of Biodiversity, Conservation and Attractions.