Dwarf Desert Spike-rush, is a small, erect perennial sedge that typically grows to less than 10 cm tall. The above-ground parts grow in response to inundation, subsequently dying back to an underground tuber during dry periods. Leaf sheaths are purplish at the base. The species has been recorded as flowering and fruiting throughout the year. The fruit is a nut with distinctive small protuberances on the surface.

Dwarf Desert Spike-rush occurs in temporary wetlands, predominantly freshwater and semi-saline swamps. Dwarf Desert Spike-rush is known in the Northern Territory from eight remote locations, ranging from the northern Tanami Desert to the southern parts of the Finke bioregion and the edge of the Simpson Desert, a range of 600 by 560 km with an area of occupancy estimated to be 2 to 50 km2. It has also been recorded from the Lake Eyre and Gairdner–Torrens regions of inland South Australia, and the Murchison and Avon Wheatbelt districts of Western Australia. 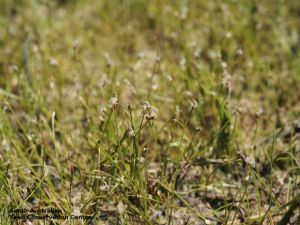 In the Northern Territory, invasion of Dwarf Desert Spike-rush habitat by Couch Grass has been extensive at Illparpa Swamp, is well advanced at Stirling Swamp, and has the potential to invade all sites. Trampling of the species by stock occurs at some sites, but the long-term effect is unknown. It has been noted that at Casuarina Swamp the species was only growing under bushes where plants were protected from trampling. Hydrological change has also been identified as a threat. There are no known threats in South Australia or Western Australia.

The Dwarf Desert Spike-rush is recorded as flowering and fruiting throughout the year, however seed set has not been observed for the species at Illparpa Swamp, the most frequently visited location. Cultivated greenhouse plants from Illparpa, with constant water conditions, have also ‘failed’ to set seed. However, herbarium specimens from other locations have seeded, indicating that sexual reproduction may occur in some populations, or under specific conditions. 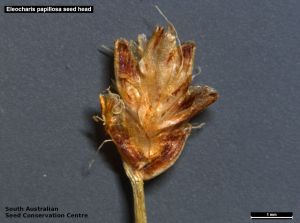 Asexual reproduction is significant in some populations, such as that at Illparpa, where seeding has not been observed despite relatively frequent inspection. Therefore, the actual number of genetically different individuals in a meta-population may be substantially less than initially appears.

Dwarf Desert Spike-rush plants with constant water conditions (such as at the Alice Springs Desert Park Nursery) exhibit an annual die-off of the above ground shoots. It is not known what controls this, but age, season and cold are all possible factors. These plants subsequently resprout. Informal trials indicate that resprouting can occur from the tuberoids after they have been stored in dry conditions

Information Source: Government of Australia, Department of Environment and Energy and Department of Biodiversity, Conservation and Attractions.