The main threats to Eucalyptus dolorosa are inappropriate fire regimes, lack of recruitment and restricted distribution. 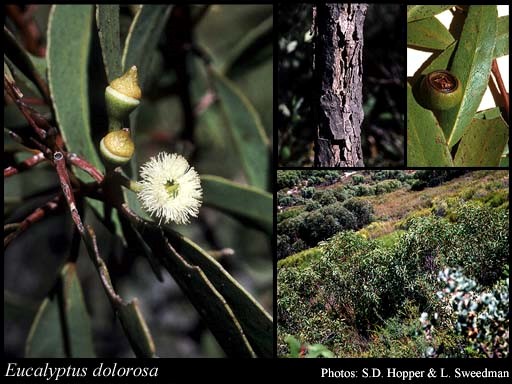 Eucalyptus dolorosa is a low mallee which generally grows to 2.5m tall with stout stems and rough grey bark on the older stems.

The juvenile leaves are broadly falcate, and light bluish-grey in colour while the adult leaves are slightly glossy and green, lanceolate to falcate, and measure 10 x 2 cm. They have a moderately dense vein network and numerous oil glands. The inflorescences are axillary, but are clustered at the leafless ends of branchlets, appearing to be terminal and there are 7 flowers in each.

The buds have pedicels up to 1 cm long and are rhomboid in shape, 9 x 6 mm with a slightly beaked operculum; The stamens are very numerous and the fruits have stalks to 7 mm long, and are cup-shaped to globose, measure 1 x 1.4 cm, and have four valves. The seeds are brown, pyramidal and winged.

The first collection of Eucalyptus dolorosa was made in 1987 by M.I.H. Brooker. It has only ever been known from the slopes and summit of a single lateritic hill in the Dandaragan area. This area was burnt in 1978, and although the population flowered every year after its discovery in 1987, it didn’t produce fruit until 1991.

The area was fenced from stock in the late 1980s, protecting this species and a number of other threatened and Priority species that also occur in this area of remnant mallee heath. Plants occur in eight clumps, all of which are in good health. It has been noted that this species persists in a refugial site, and suggested that E. dolorosa is probably a relict species, barely surviving extinction as a consequence of a drying climate in the late Pleistocene period.