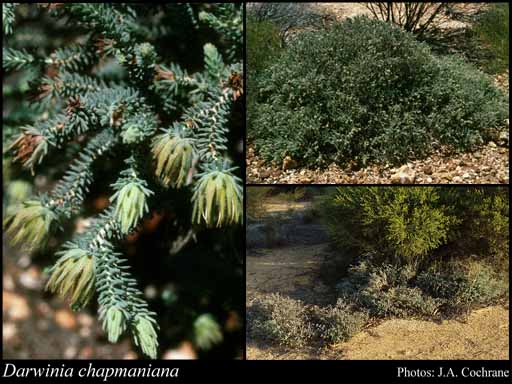 Chapman’s Bell is a rounded, spreading shrub with many branches and a woody rootstock. This species grows 30–60cm high and up to 3m wide. Leaves are grey-green and hairy and grow to 7mm long. Flower heads are erect to nodding, and carry 10 small, red, tubular flowers. The species flowers in October, or from September to December.

Chapman’s Bell is known from a restricted area near Coorow, south-east of Geraldton. This species was previously known from one population south-east of Coorow, where it occurs in a Nature Reserve alongside a track. In 1992, this population consisted of more than 2000 undisturbed plants. New populations of Chapman’s Bell (D. chapmaniana; including three sub-populations) have since been discovered as part of surveys and monitoring programs undertaken within the Northern Agricultural region.