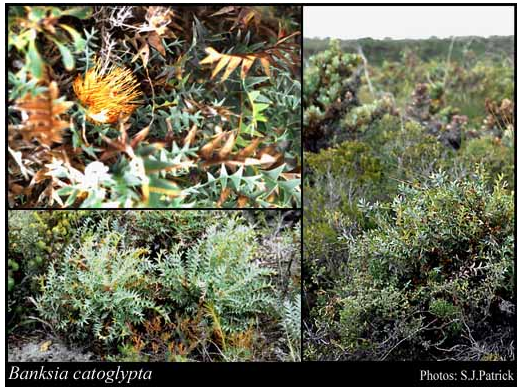 Banksia catoglypta is a shrub to 1 m tall and 1 m wide. The leaves are blue-green, 15-30 cm long and 2.5-7 cm wide. The flower heads are golden yellow, 7-8 cm across on short branchlets, with several linear, leaf-like bracts and rusty-red fruit. Seeds are two per capsule, enclosed within a papery separator.

Banksia catoglypta is endemic to Western Australia, occurring in the South West Botanical Province. The only known population is located in the Northern Agricultural Region near Badgingarra. It grows in white sand over gravel in close proximity to, or on top of, laterite breakaways. Banksia catoglypta is found in kwongan heath. Associated species that are common across the range of distribution include Propeller Banksia (B. candolleana), B. lanata, B. sessilis, B. kippistiana, Petrophile nivea, and Roadside Teatree (Leptospermum erubescens).

Banksia catoglypta flowers from June to July. Reproduction is from seed which is produced after flowering, and remains on the stem for many years.

The main threats to Banksia catoglypta include fire and grazing. As both subpopulations are located in remnants surrounded by agricultural land, there is a high risk that each subpopulation could be destroyed by a single fire event. As it is a banksia, regeneration from the existing seed bank is likely to occur following a fire, but then the seedlings will be prone to grazing from rabbits, and susceptible to further fire events.