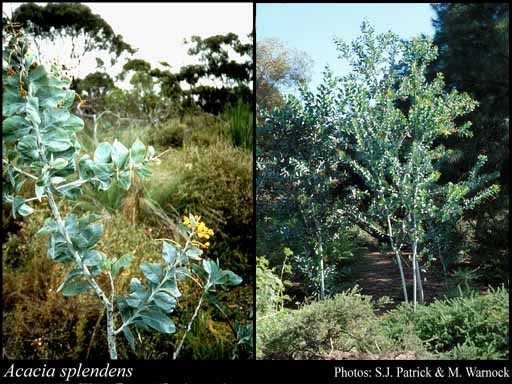 Acacia splendens is more commonly known as the Splendid Wattle or the Dandaragan Wattle. It is listed as Endangered under the Commonwealth Environment Protection and Biodiversity Conservation Act 1999 (EPBC) and is Declared Rare Flora under the Wildlife Conservation Act 1950.

The splendid wattle is known from two subpopulations 60km apart in the Dandaragan to Mogumber areas of Western Australia. One subpopulation has 900 plants (2003 survey) and is found on a road reserve, adjacent private property. The other subpopulation is on private property and consisted of less than 20 plants the last time it was surveyed.

There is also a record of a herbarium specimen collected in 1985 from a nature reserve. However, the current existence of the plant is uncertain as it has not been relocated since that time.

The splendid wattle is a tall, spindly shrub that grows up to 4m high (or more rarely a tree up to 8m high). It produces showy flower heads of golden yellow, towards the ends of the branchlets, and long (11cm) purple-brown seed pods. The flowering time is May.

The largest subpopulation of splendid wattle grows in brown gravelly loam on the slopes of a lateritic breakaway, and on the adjoining slope and alluvial flat below the breakaway. It occurs in a low woodland of Corymbia calophylla (marri) over low scrub with Xanthorrhoea preissii (grass tree), Hakea lissocarpha (honey bush) and Hypocalymma angustifolium (white myrtle).  The second subpopulation is found along a creekline.

This species is closely related to Acacia microbotrya (Manna wattle) and Acacia daphnifoli, and like these species it is capable of root suckering. Root suckering, combined with prolific seed production means the species is able to regenerate well after fire, provided there is a suitable length of time between burns.

Threats to individual plants include degraded habitat, weed invasion, grazing, track maintenance and inappropriate fire regimes.  The species as a whole, is threatened by the lack of recruitment of new individuals and the restricted range of populations.