There was plenty of talkin’ – about healthy soil, bugs and biology – at the recent 2015 Talkin’ Soil Health Conference held earlier this month in Kojonup.

Around 150 farmers and industry representatives attended the conference,which was an initiative and collaboration between Western Australia’s seven Regional NRM groups.

The conference provided a great opportunity for those attending to discuss ideas and share knowledge about new technologies, and how to manage soils for the future.

Local producer Warren Pensini from Blackwood Valley Beef; Master Gardiner; Sabrina Hahn from the ABC; and Neil Bennett from the Bureau of Meteorology were among the excellent line-up of speakers on the day.

Peter Keating from bioscience – “soil is essentially alive, a gram of soil can have 50 000 species!” @TalkinSoil @NACC_NRM #biodiversity

Some of the Western Australia’s leading producers also shared their stories, including four ‘Soil Champions’ chosen from WA’s NRM regions.

NACC NRM Officer, Heather Legge, was lucky enough to attend the conference and returned with a glowing report.

“It was great to hear topics discussed from so many different angles, but to still see each speaker drawing similar conclusions about similar subject matter,” she said. 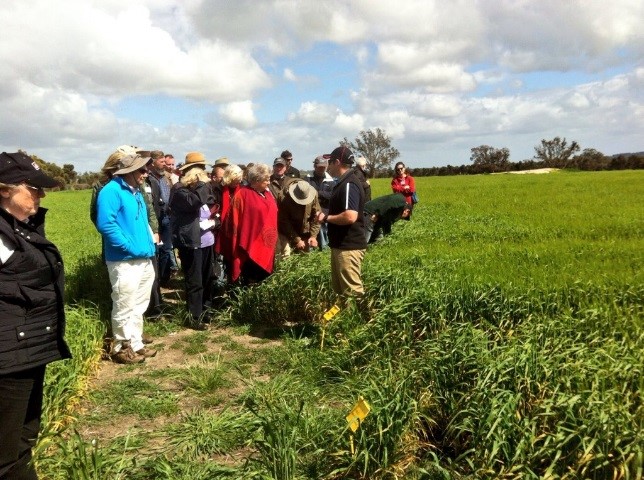 “There was a strong focus on how the different farming techniques explored at the conference will improve not only environmental stewardship, but also productivity and profitability to ensure a sustainable future for farming.

“Many of the farmers were convinced that the biological farming systems they were show-casing are the way of the future, but there are still questions about where best to start, and how to measure changes over time. The conference provided a place and forum to discuss how to overcome these challenges.

“As farmers are faced with increasing challenges into the future, such as changing rainfall patterns, biological farming may well be the next “big thing”. I really look forward to seeing how biological farming influences farm practices in the NAR over the coming years.”

Taking action in the region

Bugs and Biology is a small group of like-minded farmers in the Kojonup area who are running a long-term trial investigating the costs and benefits of different types of soil ameliorants in their cropping paddocks.

While at conference, the NACC team visited a trail site with the group.

Low and high rate conventional applications are compared with various biological farming methods. Each of the biological treatments are ideas that each member of the Bugs and Biology Group wants to try on a small-scale before implementing across their property.

The treatments look at the effect on microscopic soil life, as well as soil nutrients, and see how this affects crop yield. Overall profit is a key focus, so the trial also considers the cost of each type of treatment.