Take a walk in virtually any bushland or dunes around Geraldton and Dongara and the chances are that you will encounter African Boxthorn. This woody weed has become a scourge on our environment.

Since its introduction from Africa as a hedge plant and a “cheap” alternative to barbed-wire fences, African boxthorn has quickly established itself in its new home. Introduced into the Geraldton area in the late 19th century, it has spread north to Horrocks and south to Port Denison, and travelled well inland up many watercourses. It is predicted to keep spreading if left unchecked.

Numerous efforts have been made over the years at controlling this weed – which has kept it in check in some areas. However, with so many individuals and organisations independently involved in boxthorn control, there has been a push to introduce a greater level of coordination between all key players to maximise everyone’s control efforts.

In 2016, the Northern Agricultural Catchments Council (NACC) developed a Draft Regional Management Plan for Control of African Boxthorn in liaison with other key stakeholders, who recently met at the Batavia Coast Maritime Institute (BCMI) to discuss the plan and how recommendations for coordination of boxthorn control might be implemented.

As a first step, representatives from local and state government agencies, as well as staff from NACC and BCMI, agreed that sharing information on boxthorn control activities was important, with NACC offering to collect and store all available data. The need to identify sources of funding for boxthorn control, on-going surveillance of new boxthorn population,s and monitoring of existing control works were also highlighted.

During the meeting, attendees were joined by community members to witness a demonstration of boxthorn control. Local contractor Barney’s Bobcats demonstrated a new automatic “cut and paste” hydraulic device dubbed “Pac Man” – so-named because of its circular cutting head. Boxthorn stumps cut using this device will be monitored for re-sprouting – a huge problem when trying to kill boxthorn.

Dr Mic Payne, Coastal and Marine Program Coordinator at NACC said: “It was great to get so many people involved in the fight against African Boxthorn in the same room at the same time. It is hoped that a coordinated approach will improve opportunities for funding on-ground works across our region. A highlight for me was the unveiling of a new tool for controlling boxthorn, and I can’t wait to check for re-sprouts.”

“The meeting represented an important first step towards a coordinated approach to boxthorn control in the region, by collaborating we can achieve a lot more against this prickly pest.”

This project is supported by the Northern Agricultural Catchments Council (NACC) through funding from the Australian Government’s National Landcare Programme. 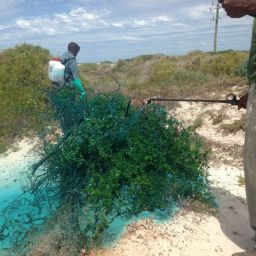 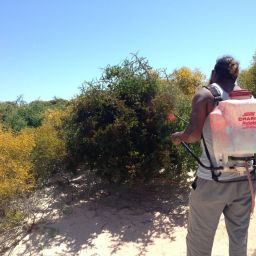 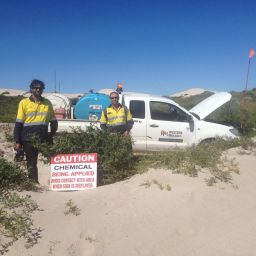