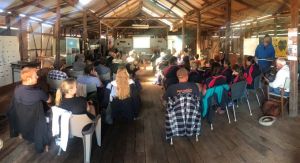 Western Region Healthy Landscapes Manager Elisabeth McLellan said the two-day program was a great reflection on the spirit of collaboration that has been with Hamelin Station Reserve ever since it was first purchased by Bush Heritage in 2015.

“We had record numbers for the Science Fair, as well as for all of the associated field activities: the early morning birdwatching excursion, sandpad track monitoring, fauna radio tracking, art and craft activity, campfire gathering, homestead walking tour, and of course, the big bush barbecue breakfast at the camp kitchen.

“We also had the best-ever spirit of collaboration between Bush Heritage and the Malgana Aboriginal Rangers and community, who are already sitting down with us to plan next year’s event.” 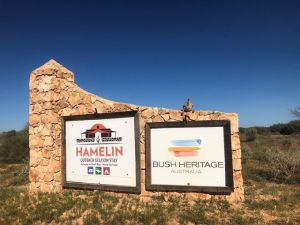 “As with many forums and conferences one of the highlights for me was the time between the formal talks, when people get to form new partnerships, reconnect with old friends and develop new ideas – which hopefully turn into new projects.”

So stay tuned to Science Week 2020 and you may just hear about some of these projects, or at the very least you can sit around the fire pits and share a few yarns or marvel at the clearest night skies you’re ever likely to see.

This project was supported by NACC NRM and Rangelands NRM through funding from the Australian Government’s National Landcare Program.