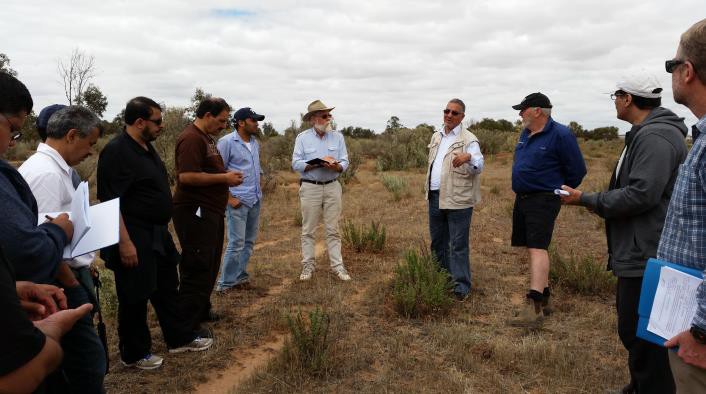 Their visit was funded by the Food and Agricultural Organisation of the United Nations (FAO) to better understand how Australian agricultural industries work with farmers in poor soil quality areas.

The Northern Agricultural Catchments Council’s Sarah Jeffery and Violetta Pristel, the Department of Agricultural and Food Western Australia’s Adele Killen, Farmwood’s Peter Ritson and local farmers Gary and Kerry Butcher played host to the Saudi Arabian leaders while they were in the NAR, walking them through a project measuring the carbon stocks in trees growing in saline soils.

The Saudi leaders expressed some amazement at the collaboration between industry and farmers, identifying such collaboration as one of the great accomplishments for Australian agriculture. They lamented that partnerships between the sectors was not well established in their country.

“It was great to be able to show them one of the regions six carbon salinity sites to compare, share and discuss international practices,” said Ms Jeffery.

While Farmwoods’ Mr Ritson explained that, at the site visited, the quantity of carbon sequestered was not high, but land owner Mr Butcher explained the importance of the vegetation to the whole farm’s system. “The stubble, the pasture, the saltbush and the trees all work together,” said Mr Butcher.

The Saudi Aradian leaders also showed particular interest in understanding Australia’s approach to revegetation on farms, including species are used and the carbon sequestered.

A species that created a lot of discussion was the bluebush (Maireana brevifolia) as the visitors had not come across this species before and were interested in how the species self-sowed without having to be planted. The common species oldman saltbush (Atriplex nummularia) was also major talking point at the site as Saudi Arabia also use this species for revegetation of saline land.

Ms Jeffery said, “Another interesting discovery was learning that in Saudi Arabia, much like Australia, they have little success with direct seeding for revegetation and also use seedlings over seeding”.

“This was actually quite fascinating. They explained to us that they had been using seedlings as a preferred method to seeding but were under the impression that this might be seen as correct practise and almost seemed relieved to find out that we actually do this too”, Ms Jeffery said.