Earlier this March NACC NRM partnered with Department of Primary Industries and Regional Development (DPIRD) and the Parkfalls Residents Association to deliver a workshop aimed at raising awareness of the impact of rabbits and the effective control measures available to small land holders.

To begin the workshop DPIRD Biosecurity Officer Mike Jones spoke about rabbits being one of Australia’s most widespread and destructive environmental and agricultural vertebrate pests. In addition, they directly compete with native wildlife for food and shelter, and their digging and browsing can lead to a loss of vegetation cover, which in turn can result in slope instability and soil erosion.

Mr Jones also discussed a range of control methods – from baiting, warren ripping, biocontrol and trapping – and summarised by saying it is important to remember that there is no silver bullet for rabbit control and integrated pest management is the best approach. 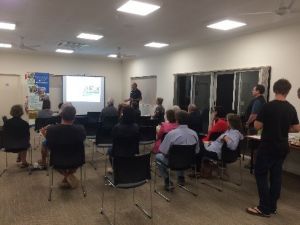 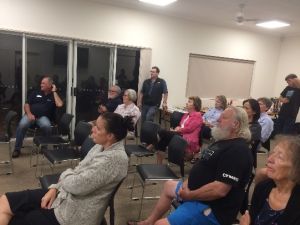 Northern Biosecurity Group (NBG) Executive Officer Marieke Jansen also gave a presentation and updated the participants on Recognised Biosecurity Groups generally, the NBG and the work that they have been doing to control declared pest species in the area.

“NACC strongly recommends working with local NRM Groups and biosecurity staff to discuss next steps as this can successfully reduce and maintain rabbit populations at low levels.”

Annabelle added “I would also like to extend a huge thank-you to the Parkfalls Residents Association, DPIRD and the NBG for helping make the event possible.”

This project is supported by NACC and South Coast NRM through funding from the Western Australian Governments State NRM program, supported by Royalties for Regions.