A search for the rare and endangered Verticordia spicata subsp. squamosa, commonly known as the scaly-leaved featherflower, has struck it lucky with two new sub-populations being identified in the Midwest. 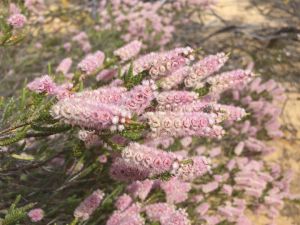 Department of Biodiversity, Conservation and Attractions (DBCA) conservation officer Alanna Chant said the find was very significant, as it more than doubled the known number of natural wild plants.

“We now have two new sub-populations, one with eight plants and the other with two plants. We can now collect seed from these plants and we’ll have greater genetic diversity within the plants that we grow,” she said.

“Actions so far undertaken by DBCA to save the scaly-leaved featherflower have included seed collection, seed storage, habitat protection and restoration, along with translocations to enhance wild populations.”

To help improve the trajectory of this rare flora, NACC has been working with the local community and DBCA to try to increase the size of the population.

In late spring, NACC and DBCA hosted a search and rescue field day to search for the scaly-leaved featherflower and also help staff and volunteer community members to distinguish the plant from a range of similar Verticordia that often grow in the same habitat.

NACC’s Biodiversity Program Coordinator Dr Jessica Stingemore said that species close to extinction, like the scaly-leaved featherflower, require special effort to increase their chances of survival and that the community can play an important role.

“The skills and passion of these individuals, groups and volunteers caring for our threatened and rare plants helps drive positive NRM results in our region.”

“And given the series of inter-related problems that exist for threatened plants, NACC is proud to partner with DBCA, landholders and local community to help save this species from extinction.” 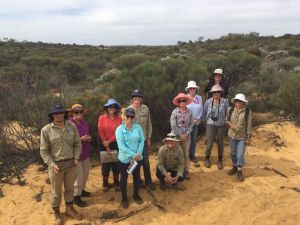 The scaly-leaved featherflower is a dense bushy shrub with rounded leaves that closely overlap and are pressed to the stem, providing the scaly appearance from which this subspecies derives its name (the Latin word for scaly is squamosus). The striking flowers are produced in late spring and early summer forming dense spikes on the ends of the branches. They open mauve-pink before the whole spike fades evenly to white with age.

The species is believed to have once been widespread, but is now found in only a few locations near Three Springs and Mingenew. Much of the habitat for this plant has been historically cleared, and it now grows only in areas of remnant vegetation on farmland.

Before this exciting find there were only six natural wild plants known in two locations.  In addition to the natural populations there are around 100 translocated nursery grown plants established across three sites.

With these new discoveries there are now 16 natural wild plants in four populations and sub-populations of scaly-leaved featherflower in the Midwest.

NACC and DBCA are delivering translocation and monitoring project services for the scaly-leaved featherflower populations in a partnership approach.  These project services are supported by the Australian Government’s Regional Land Partnerships (part of the National Landcare Program).

Great work team. Thank you for your dedication & caring.

Congratulations to DCBA’s Alanna, NACC’S Jessica, the volunteers and all involved in this exciting find and subsequent actions.
Birdlife Midwest group.

How brilliant!
We have a great area of protected natural bush behind my home in Connolly Western Australia, which would be a great planting spot to start a new colony of these lovely shrubs!
Sue-fisher@bigpond.com

Good onya, Jessica. There needs to be a change in clearing practices in the wheat belt- no more broad acre farming or nasty chemicals- all water courses and hills should have natural vegetation and a big effort should be made to link up these nature strips or corridors – at least one third of private land ownership needs to be left or brought back to its natural state. Fire stick burning is the best – ask the experts – they have had 40 000 years experience at it.
With climate change, plants and animals have to move and adjust- at present they can’t always do this. Let’s have a creative and multilateral attack on this problem of land degradation, change crops, grow natural or niche products with value adding and bring back healthy landscapes and biodiversity with not dust devils but field of diverse colour.
https://radio.abc.net.au/programitem/pg4G08gkRG?play=true Use this link to hear about the history of the wheat belt.
.