Fishing, surfing and camping … Coronation Beach located north of Geraldton in the NACC NRM Region, is the place for it all.

The coastal hotspot welcomes hundreds of locals and visitors looking for the perfect location to make the most of our region’s stunning natural assets and the great outdoors.

But, the steady increase of people using this area also has a down-side – through putting more pressure on the fragile coastal environment.

The Shire of Chapman Valley, together with the Midwest Ports Authority, Landcorp and the Northern Agricultural Catchments Council (NACC), recognised the need to protect Coronation Beach and its surrounding natural beauty while simultaneously providing facilities for users to enjoy the coast without negatively impacting the native flora and fauna. On-ground works began in 2016 with African boxthorn (Lycium ferocissimum) control works, and revegetation of the dunes, under NACC’s African boxthorn Control project.

Marieke Jansen, NACC’s local Natural Resource Management Officer said this collaboration has enabled more to be done for the coastline.

“This project is a very good example on how different stakeholders can join forces to help protect the region’s fragile coastal environment. Pooling our resources meant that the Shire was able to apply for greater funding through the State NRM Program,” she said.

“Midwest Ports have been supporting the control of invasive species and coastal rehabilitation works along the Chapman Valley coast for quite a few years now,” he said.

“The Port Authority owns a large coastal strip and it is important that weeds like African boxthorn are being managed as it impacts on the native vegetation.”

One of the major outcomes at this stage of the project are the three off-road parking spots around the Coronation Beach area. Increasing visitor activity meant parking at these spots became more difficult with vehicles getting bogged in the sand, and cars parking on the fragile coastal vegetation – which ultimately was degrading the sand-dunes, causing vegetation loss and dunes to become prone to wind erosion.

After consultation with NACC, Midwest Ports and the local surf clubs, the Shire of Chapman Valley committed an extra $10,000 to formalising the off-road parking areas so people would have easy access and stay within the allocated areas and, most importantly, off the coastal dune vegetation.

Construction of the parking areas was undertaken with help from inmates from the Greenough Regional Prison.

“It is great to see these sorts of projects developed, working to benefit the environment and the community that are using the facilities,” he said.

“Projects like this additionally provide our prisoners with an opportunity to put into practice a skill they have learned during their time at Greenough Regional Prison. It’s good for them to be involved, as it assists with their rehabilitation and supports future community reintegration.”

Beautiful day at Coro’s. great to see people are using the upgraded parking areas and not parking on coastal vegetation @NACC_NRM @NRM_WA pic.twitter.com/C1PuJzvpBH

Local surfers have also benefitted from the new off-road-parking areas. Darryl Bailie, a member of the Geraldton Longboard Rider’s club, who has been working with the Shire and NACC to protect the fragile dunes said: “The number of surfers for this area has more than doubled over the last couple of years.

“The longboard surf club recognised very early that the increased number of cars were damaging the vegetation and the car parks were becoming inaccessible.

“We (the longboard surf club) have been putting in bollards to mark parking areas for a number of years, but because of the moving sand, some of the areas were not being used and people were parking on the edge of the tracks to avoid getting stuck in the sand. These upgrades are making access easier, and we have not seen people parking on the dune vegetation at all.”

This project was made possible through funding from the Western Australia State NRM Community Action Grant Project. 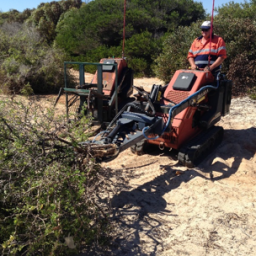