The Northampton Botanic Line is a native plant, bush-garden located along the old Geraldton-Ajana railway line in the Northampton townsite.

The railway line closed in the late 1950s, and the land left vacant for many years. 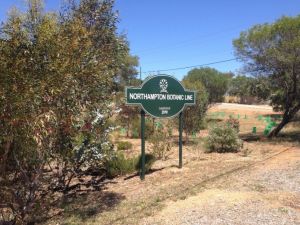 The site was restored and the garden planted in 2010 – thanks to a group of passionate local Northampton volunteers, who planted an array of beautiful native plants, including Melaleucas, Grevilleas, Acacias, Verticordias and everlastings, just to name a few.

One section is entirely devoted to plant species which include the name oldfieldii, such as Darwinia oldfieldii and Solanum oldfieldii; while another section is called the ‘princess patch’ as it features a number of beautiful Silver princess (Eucalyptus caesia) eucalyptus trees. 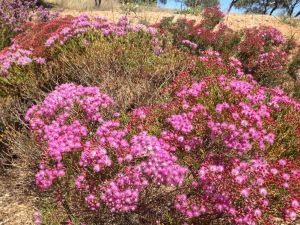 The Botanic Line is managed by a local community group, which continues to devote time to maintaining the bush-garden, by weeding, mulching, repairing reticulation, and further plantings.

There is a walking trail through the Botanic Line which is open to the public for free access. It begins in Stephen Street in Northampton (opposite the Northampton Regional Hospital), and follows a path alongside the old railway tracks, past a replica of a rail siding house (or waiting room), and down the hill for approximately 400 metres.