Eurardy Reserve is tucked into the northern edge of the Southwest Australia Biodiversity Hotspot, where it protects more than 500 plant species, including at least five nationally endangered or vulnerable plant species. The Reserve – owned and managed by Bush Heritage Australia – forms a critical habitat link between the Kalbarri National Park and the Toolonga Nature Reserve to the north. 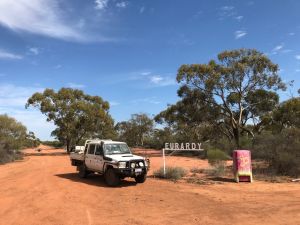 Land clearing and salinisation have had a huge historical impact on the Southwest Australia Biodiversity Hotspot, making the remaining bushland on places like Eurardy Reserve exceptionally important – especially for threatened species such as the nationally vulnerable Malleefowl (Leipoa ocellata). The reserve is also home to the endangered Small-petalled Beyeria (Beyeria lepidopetala), a plant presumed extinct until rediscovered in 2005.

Eurardy Reserve has benefited enormously from the conservation efforts of Bush heritage and its army of generous volunteers. Volunteers regularly join forces with Reserve Managers to carry-out a range of conservation actions, such as surveying malleefowl activity, and in so doing, make an immensely useful contribution to what we know about this nationally vulnerable species on Eurardy.

Eurardy Reserve was purchased by Bush Heritage Australia in 2005 and this resulted in an immediate impact on Western Australian conservation. Overnight, the amount of York gum (Eucalyptus loxophleba) woodlands protected in the Geraldton Sandplain bio-region jumped from less than one per cent to 22 per cent.

The decision to buy Eurardy had many other benefits, not in the least of which was cementing the protection of part of the Southwest Australia Biodiversity Hotspot. One of only 34 biodiversity hotspots recognised globally, the province makes up just 0.23 per cent of the Earth’s land surface and yet supports 12.6 per cent of its rare and threatened flora.

In fact, the diversity of plant species found in this region outranks that of Australia’s tropical rainforests, and its annual wildflower displays attract people from all over the world.

For more information and to find out how you can volunteer at Eurardy, please visit https://www.bushheritage.org.au/places-we-protect/western-australia/eurardy

Alternatively, you can read NACC CEO Richard McLellan’s blog about his recent volunteer time at the reserve.