Located 8.4 kilometres along the Rabbit Proof Fence Road in the Shire of Perenjori – past Goatcher Road on the left – is a sign on the right which reads ‘Rock Hole’. 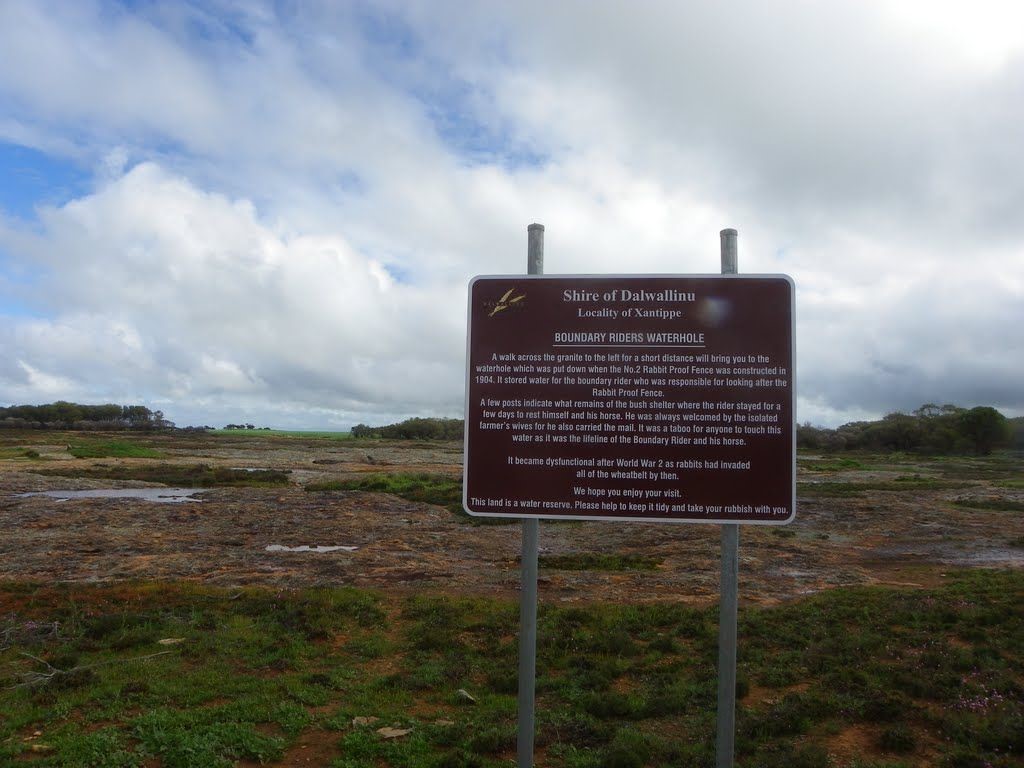 A short walk across the granite to the left  brings visitors to the Boundary Riders Water Hole which was put down there when the No 2 Rabbit Proof Fence was constructed in 1904.Its main purpose was to store water for the boundary rider who was responsible for looking after the Rabbit Proof Fence … and hence its apt name.

There are even a few posts nearby which are the remains of the bush shelter where he used to stay when he was there.

The Rabbit Proof Fence, now called the Vermin Proof Fence, was conceived and constructed early last century in an attempt to prevent rabbits from entering Western Australia’s agricultural areas, and to try to head-off the devastation caused by rabbits to cereal crops and pastureland.

The enormous task of building such a fence – from the south coast to the north coast – was started in 1901, and when finished, stretched 1,827km from near Hopetoun in the south to Cape Keraudren, north of Port Hedland.

A new fence – further west of Fence No 1 – was constructed later, and its line is crossed just east of Cunderdin on Highway 1. A No 3 Fence was later built out of Geraldton to meet No 2 Fence to try to deter emus from invading the agricultural areas.

By 1907, all three fences were looked after by a staff of 35, Of whom 25 were ‘fence runners’. There were also three rabbiters and two camel drivers regularly working the fencelines.

Needless to say, given our still, on-going battle to control rabbits across the Wheatbelt, none of the fences managed to avoid the invasion. The Rabbit Proof Fence, and its distinctive landmarks like the Boundary Riders Water Hole, provide a lasting memory of this chapter in our agricultural history.

Information source: Shire of Dalwallinu and Shire of Perenjori