Alexander Morrison National Park is located on the Central West Coast Sandplain, 50 kilometres west of Coorow and is renowned for its incredible diversity of endemic wildflowers. 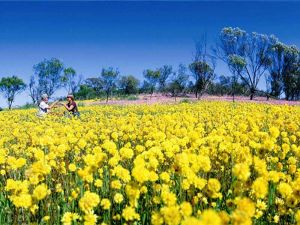 Named after Alexander Morrison (1849-1913) who was the first official Western Australian government botanist in the Bureau of Agriculture between 1897-1906, it was declared a National Park in 1970.

Morrison collected specimens extensively in Western Australia and Victoria, briefly at Gawler in South Australia, and undertook an excursion to the New Hebrides (Vanuatu) in 1896. He amassed a sizeable private herbarium that was bequeathed to Edinburgh University and has since been shared around the world herbaria.

The impoverished soils of the northern sandplains, severely depleted of trace elements such as nitrogen and phosphorus, have allowed this unique flora to evolve in these harsh conditions. The proliferation of poison peas saved this area from clearing for stock pasture.

The Park consists of low scrub and heath on undulating sandplain hills, interspersed with rocky outcrops and small streams cutting across the landscape. Tall eucalypts grow along stream beds making for beautiful, shady picnic locations. Mallee thickets are also quite common throughout the park as are heathland birds and mammals.

A wonderful place to visit, just remember there are no visitor facilities in the park.