The mighty Murchison River in Kalbarri National Park cuts a path through sandstone cliffs and travels out to the Indian Ocean, creating a stunning scenic view, and a wonderful place for bushwalking, hiking, trekking, cruising, canoeing and fishing.

The Murchison River is a few million years old and spans approximately 820 kilometres, making it the second longest river in Western Australia. It has a catchment area of 82,000km2 – which is larger than Tasmania. 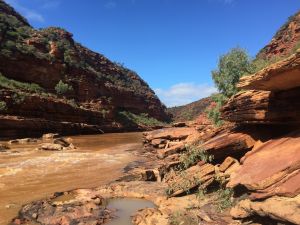 The river starts its journey in the rangelands near Meekatharra, traveling across dry plains, hills, salt lakes and gorges with many tributaries forming this massive catchment area. Heavy rainfall from the movement of decaying tropical cyclones can often result in floodwaters reaching Kalbarri up to three weeks later. 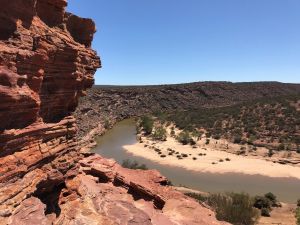 In extreme flood events, muddy brown water can be seen emptying into the ocean creating a stark contrast between blue water and brown. These floodwaters carry an amazing array of nutrients that nourish and restore the river system. Within a month the river is teeming with life again.The Murchison River is home to nearly 200 species of birds. Osprey, ever-popular Pelicans, and Sandpipers are always keeping watch over their territory. Wedge-tailed Eagles and Kestrels are also often spied patrolling the deep gorges, while Fairy Martins and Swallows nest in the cliff faces.

The lower reaches of the Murchison River is home to an amazing array of birdlife with Red-tailed Black-cockatoos, Carnabys Black-cockatoos, Egrets, Kites, Wood Ducks and Black Swans. In the townsite – named after the river – swarms of Galahs, Ringneck Parrots, Mudlarks and Cuckoo-shrikes can often be seen in the trees and grassy river foreshore. The Murchison River is also one of only a few rivers in Western Australia which have no introduced fish species. 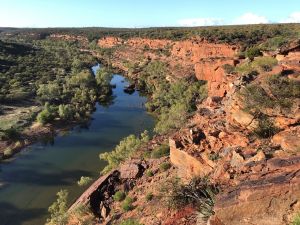 There is a whole lot to do at the Murchison River, including a range of tours, and full-day hiking and canoe trips. If you prefer fishing, throw in a line at the river’s tidal reaches and you’re likely to snare a Bream, Whiting or Mulloway. The Murchison River is also home to Blue Manna Crabs, Mud Crabs and untold shell life.