The Jurien Bay Underwater Interpretive Trail is an artificial underwater habitat that was a first of its kind in Western Australia.

It starts approximately 25 metres out from the Jurien Bay beach at the end of the old jetty piles, and varies from 2.5 to 6 metres in depth. 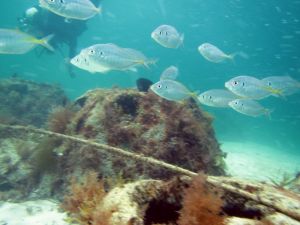 The trail was created in the area by placing 78 ‘reef balls’ close to the remains of an old wooden jetty. These reef balls were fabricated and installed by the Jurien Bay Men’s Shed, and included 32 pallet balls weighing 750kg, 32 bay balls weighing 300kg, and 16 mini balls weighing 150kg. The reef balls, made from a special marine-friendly concrete, are designed to mimic natural reef systems creating habitats for fish and other marine life.

Through the utilisation of the existing old jetty piles, the placement of the artificial habitat has created a unique and eco-friendly artificial reef, which has enhanced the diversity of the existing marine life, and showcases the underwater wonders of the Jurien Bay Marine Park.

The reef includes caves, grottos and overhangs – covered with colourful sponges, sea squirts, anemones and corals. There are multitudes of fish and invertebrate species in the area, as well as an extensive seagrass meadow. This meadow grows in the shallow lagoons inside the reef, and provides a vital nursery habitat for hundreds of marine animals, including the Western Rock Lobster.

Whether you are a novice snorkeler or an experienced diver, there is plenty to enjoy along the Underwater Interpretative Trail.