#PeopleOfNRM – Who is Greta Thunberg?

A year ago, the name Greta Thunberg was unknown. The words “climate change,” however, were pretty familiar. Here in Australia we would think of heat waves, bush fires, coastal erosion and flash floods. 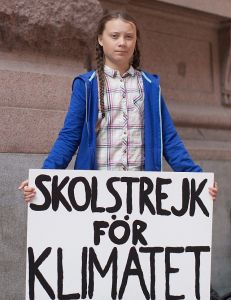 But now when you think of climate change – or the climate crisis, as it is now commonly referred to – it’s likely you think of Thunberg.

And in light of the recent Global Climate Strikes – led by and large by young people like Greta – this month’s #PeopleOfNRM is a short insight into the young climate activist from Sweden.

Thunberg is a 16-year-old from Sweden. Last summer, she began demonstrating outside the Swedish Parliament; she was demanding more action on the issue of climate change. In the weeks leading up to the country’s general election, Thunberg sat on the steps outside of the parliament building in Stockholm. She held up a (now iconic) sign that read “Skolstrejk För Klimatet” — it translates to “school strike for climate.”

She said at the time, “I am doing this because nobody else is doing anything. It is my moral responsibility to do what I can. I want the politicians to prioritize the climate question, focus on the climate and treat it like a crisis.”

Many told Thunberg she should be at school. She responded, “I have my books here. But also I am thinking: what am I missing? What am I going to learn in school? Facts don’t matter anymore. Politicians aren’t listening to the scientists, so why should I learn?”

Fast forward to now, and the teen still isn’t giving school much thought. She’s now famous around the world for raising awareness about the climate crisis. In the past year, Thunberg has held governments accountable with her damning speeches. She recorded a spoken-word record with British band The 1975, spoke at the United Nations climate talks, and has even been nominated for a Nobel Peace Prize.

Together with two other MPs, Norweigan Socialist MP Freddy Andre Ovstegard nominated Thunberg. He said, “we have proposed Greta Thunberg because if we do nothing to halt climate change, it will be the cause of wars, conflict, and refugees.” He added, “[Thunberg] has launched a mass movement which I see as a major contribution to peace.”

Thunberg’s strike to halt climate change has launched a mass movement involving millions of school children. The School Strike for Climate — or Fridays for Future — has seen students from all over the world ditch the classroom for meaningful peaceful protest.

Thunberg started her strike in August. In September, she started attracting media attention, and in November 2018, 17,000 students in 24 different countries took part in school strikes on Fridays. It was shortly after this that Thunberg began making high profile speeches.

By March 2019, nearly two million students in 135 countries protested against climate change. In August, the number of people striking for the planet hit 3.6 million.

Students across New York City have been granted absence from school to take part in the Global Climate Strike. From September 20 to 27, millions of people around the world will join students to protest for more action to address the climate crisis.

In the UK, student strikers are being backed by the Trades Union Congress and Amnesty International. The latter is calling for headteachers around the world to also back the protests.

Skip forward to this month and an estimated 4 million people – 330,000 plus in Australia – from over 4,500 locations across every corner of the world assembled for an historic show of community support for climate action.

The above text has been sourced from Who Is Greta Thunberg? A Biography Of A Woman Changing The World by Charlotte Pointing https://www.livekindly.co/climate-activist-greta-thunberg-biography/