One Foote On The Ground

The project is a partnership between NACC NRM, the Department of Biodiversity, Conservation and Attractions (DBCA), and Kings Park Botanical Gardens and Parks Authority.

Foote’s Grevillea is considered rare flora, occupying a range no larger than eight square kilometres within the Shire of Dandaragan and consisting of only six original wild populations. With its striking apricot-coloured flower pouches appearing from April through to August with their distinct, contrasting maroon-black styles, it is hardly surprising the species’ Latin name calliantha means ‘beautiful anthers’. The endemic grevillea forms a valuable food source for local birds and insects, who feed on the sugary flower nectar and in return, assist with pollination.

However, the species is at risk of extinction due to pressures on populations by road and firebreak maintenance, poor reproduction due to senescent (aging) populations, overgrazing of seedlings by rabbits and kangaroos, altered fire regimes, and deaths by Phytophthora dieback have contributed to the species’ decline. Today, Foote’s grevillea is listed as ‘Critically Endangered’ – meaning it is highly likely to become extinct without sufficient conservation.

The Setting Seed project aims to help safeguard the future of Foote’s Grevillea through habitat monitoring, seed collection, improved population management and threat abatement, and increasing community and landholder awareness and understanding of the species. Establishing a new population in Cataby is part of the recovery effort. Seedlings propagated from seed and cuttings at Kings Park will be planted within a fenced reserve area of suitable habitat. By alternating seedlings propagated from seed with those from cuttings, cross-pollination between unrelated plants is encouraged, helping to create a genetically diverse second generation of plants.

Wire cages have been erected around some of the more established seedlings, however Leonie Monks of DBCA says that kangaroos don’t appear to have targeted the grevillea seedlings for grazing.

“We planted 270 seedlings and cuttings of Foote’s grevillea at Cataby this year to help boost the number of plants at one of the natural locations of this critically-endangered plant,” said Leonie.

“The idea is for these seedlings to eventually cross-pollinate and produce seed, and establish a seed bank in the soil,” said Kahree.

“The next generation will emerge from this soil seed bank, and provided their parents were cross-pollinated well, should have a higher genetic diversity that will ideally lead to a self-sustaining population.”

This project is supported by NACC NRM, through funding from the Australian Government’s National Landcare Program. 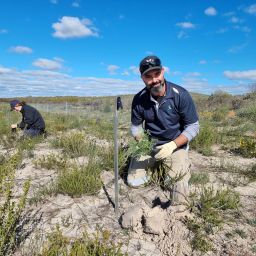 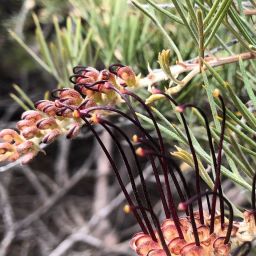