Off-Road Vehicles (ORVs) have long been a popular recreational activity in Western Australia, with four- wheel drives, quad bikes and trail bikes being a common sight along our coast. Unfortunately, as these types of vehicles have become increasingly accessible, the threat to our highly valuable coastal ecosystem has increased.

Unrestricted and unmanaged use of ORVs has frequently resulted in destroyed vegetation – leading to loss of biodiversity and increased erosion. Also, reckless use of ORVs is a significant threat to safety for both the public and riders.

Keen to find win-win solutions, the Northern Agricultural Catchments Council (NACC) received funding from Coastwest in 2013 to investigate the establishment of

coastal ORV gazetted use areas (ORVAs), to complement the existing ORVA in Lancelin. There is a need for such areas as many ORV riders approached by rangers express frustration at the lack of legal riding facilities along our coast.

NACC’s Coastal and Marine Program Coordinator Dr Mic Payne, said “Development of well-planned and managed ORVAs will provide safe and enjoyable riding experiences for families and riders alike. While ORVAs are not the entire management solution to the problem, they are a big step in the right direction.”

This project has resulted in an ORVA feasibility study that has identified three candidate areas deserving further investigation. Two of these areas are close to Geraldton while the third is near Jurien Bay. Candidate areas had to meet a range of selection criteria to be considered eligible, including accessibility from urban areas, land tenure, conservation values and potential to fulfil the expectations of the ORV community. In addition, the study documented current ORV ‘hot-spots’ in WA’s Northern Agricultural Region and helped clarify the legal issues surrounding ORVAs.

Key to the success of the feasibility study was comprehensive stakeholder engagement. Input was received from a Regional ORV Working Group (comprising coastal land managers and ORV-group representatives), online surveys targeting community and ORV rider groups, and meetings with other key players such as ORV retail outlets.

With this first stage completed, the next step is to work closely with Local Government Authorities toward development of one or more of these proposed ORVAs. Key issues to be addressed include public liability insurance, resource limitations, on-going site management and facility uptake by riders. On-country visits by local Aboriginal custodians will also determine if the sites can be developed without impacting cultural heritage.

“A good facility development model, such as the Pinjar ORVA, will go a long way to addressing many of these issues,” said Dr Payne.

NACC gratefully acknowledges the assistance provided by all project contributors, particularly from local and state government agencies, coastal community groups, industry representatives and the ORV riders who took part in the surveys. The final report is available at http://narvis.com.au/wp-content/uploads/2015/03/Off-road- Vehicle-Areas-in-the-NAR.pdf 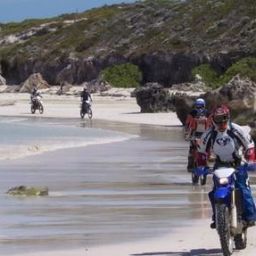