Not a Conventional Farm Field Day

“Integrating biological stimulants into your current farming program is a first step to regenerative farming.” 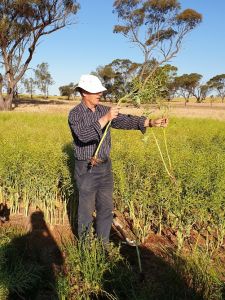 This was the key message from Dr Maarten Stapper at the recent NACC NRM field day focussed on improving biological health on farms.

The field day, part of a three day tour held in early October, focused on the success of Bindi-Bindi farmer Max Lewis in his drive to regenerate the farm he purchased four years ago.

Dr Stapper discussed the processes that were at work and the clear improvement of Max’s soils – from the increase of soil carbon and biological activity as well as the reduction of compaction, improved soil structure and the associated economic benefits of this (e.g. reduced diesel and chemical bills).

The most obvious visual improvement to the soil was the increased amount – and depth – of the organic matter and carbon stored in the soil.

Dr Stapper highlighted the importance of this as “higher soil carbon increases productivity and healthy, biologically active soils can adjust to a changing climate and remain more productive.”

Interestingly, Max is a spraying contractor and readily admits that he initially had no intention of running anything other than a conventional farm system, but was forced into the decision by the poor structure of his soils which drove up his production costs and required too much of his time to ameliorate through mechanical intervention. 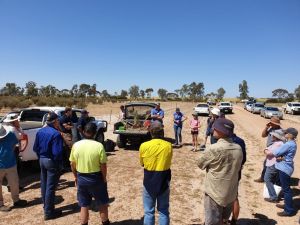 Max said “At first I maintained a strip of conventional treatments as a baseline to measure any change, after the first year, I gave up on this and committed entirely to biological farming.”

“I credit a lot of my success to the input and support of Wayne Challis from Hi-Tech Ag Solutions.”

Wayne was also in attendance at the field day and spoke of the nutrition requirements of Max’s crops and the benefits of the integration of a small flock of sheep back into what was a crop only system.

For more information about biological farming or sustainable agriculture get in touch with NACC’s Sustainable Agriculture Program Coordinator Callum Love on (E) callum.love@nacc.com.au (P) 9938 0116 or (M) 0438 989 500.