No harm, no fowl

NACC staff members were treated to a fantastic day out of the office last week, when they accompanied Department of Biodiversity, Conservation and Attractions (DBCA) staff on a very important mission in a remote section of Kalbarri National Park.

The aim of the operation was to identify possible Malleefowl mounds deep in the thick bushland, using only a map and GPS tracking device for navigation.

NACC’s Biodiversity Coordinator Jessica Stingemore and Communications Officer Ellie Honeybone travelled to Kalbarri on 20 November  and camped for a night under the stars before lacing up their boots the following day.

They were each paired up with a DBCA Ranger, allocated a section of ground to cover and soon began clawing and crawling through the scrub.

Whilst many of the mounds were determined to be old and inactive, a handful of locations showed signs of activity. 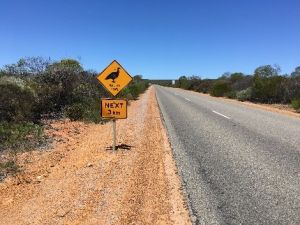 “It was hard work walking through the vegetation and the sun was beating down fairly hard for a few hours there but it was a very rewarding day.“I was thrilled to discover a mound that appeared to be active,” Ellie said. “I learnt a lot about the elusive Malleefowl and got to ask all sorts of

questions about the Park and its inhabitants from the Rangers who had a wealth of knowledge.”

DBCA Conservation Officer Janet Newell was the driving force behind the expedition and said identifying all the Malleefowl mounds in the study site was extremely important.

“This is the first step towards setting up Kalbarri as a research site for the nation-wide Malleefowl Adaptive Management Program,” she said. “DBCA is working with Bush Heritage to set up Kalbarri and also Eurardy Reserve as paired sites so we can learn more about the influence of fox predation on Malleefowl. “We also want to see whether fox baiting has been effective in protecting this threatened species.”

NACC is proud to partner with DBCA – by working together we magnify our outcomes and ensure our contributions have long-term effects and outcomes for threatened species.

The Malleefowl Adaptive Management Program is being managed by the National Malleefowl Recovery Team. Across Australia there are over 40 such monitoring sites.

This project is supported by NACC through funding from the Australian Government’s National Landcare Program. 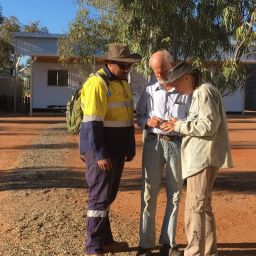