Last month NACC NRM’s Aboriginal Program Coordinator, Bianca McNeair had the honour of being invited to attend the Interim Steering Committee of the National First Peoples Gathering on Climate Change.

The committee met for the first time in Cairns on 19–21 November 2019 to set the terms of reference for a National First Peoples Gathering on Climate Change to be held in November 2020.

The Gathering aims to celebrate, learn from and enhance First Peoples-led climate change action. It will build on earlier meetings held in 2012 and 2018 hosted by Yorta Yorta Nation Aboriginal Corporation on their country. The report from the 2018 meeting (which Bianca also attended) is available at http://nespclimate.com.au/supporting-anational-dialogue-on-the-climate-change-scienceneeds-of-indigenous-communities/ 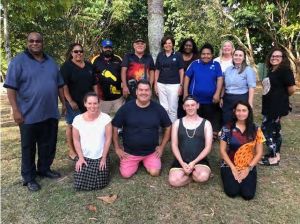 Ms McNeair said ‘The Gathering scheduled for 2020 will be an exciting opportunity for delegates from WA to discuss climate change and the impact it is having on our region, especially marine heatwaves on a national platform’

NACC NRM would like to thank the Interim Steering Committee member Djungan Neal and the Yarrabah community for making this visit possible.

The 2020 National First Peoples Gathering on Climate Change is being supported through the Earth Systems and Climate Change Hub of the Australian Government’s National Environmental Science Program.

For more information about the Gathering, contact Mandy Hopkins on 03 9239 4649 or mandy.hopkins@csiro.au