NACC NRM has a new Malleefowl mascot – however it’s still missing a name and we’re needing YOUR help to pick one!

As an avid reader of NACC Notes, you would be aware that our Regional Agricultural Landcare Facilitators (RALF) recently travelled east to attend the Annual RALF Conference in Canberra.

Because our staff are so passionate and love their jobs, they never stop working! So while one of our RALFs was on a days’ leave, on her way home from the conference, she visited Taronga Zoo and spotted this threatened bird from our very own Northern Agricultural Region and the subject of a major NACC project – Gnow or Never: Supporting Communities to Save Malleefowl. 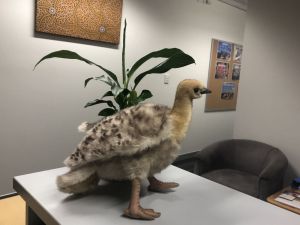 The NACC Team has since adopted this fluffy representative, as our own, but there’s just one problem…… it doesn’t have a name. We need your help.

We want something catchy and attention grabbing, something that represents the region and the work we do.

For those not familiar with this cryptic megapod Malleefowl are large ground-dwelling birds famous for their ability to build enormous mounds.

Malleefowl pairs build their nests on the ground out of leaf litter and soil raked together from the ground. The female bird lays her eggs in the mound then covers them to be kept warm by the decomposing leaf mass.

The male bird keeps a watchful beak on the nest using it to test the temperature regularly, removing or adding additional leaf litter as required. While the male continues to patch-up the nest during the incubation, the parents take no part in chick rearing, with chicks emerging from the mound completely self-sufficient.

Sadly, much of the best habitat for Malleefowl has already been cleared or has been modified by grazing by sheep, cattle, rabbits and goats and these unique birds are listed as Vulnerable under the Environment Protection and Biodiversity Conservation (EPBC) Act 1999.

Our new mascot is being kept safe and sound in our office with the NACC Team, but it will be travelling around the region and being used in promotional projects to help our community learn, love and respect our local environment.

So put your thinking caps on and send us your best Malleefowl names. There will be a prize for the name we pick.

“Monty” because it rhymes with Mallee