Midwest farmer – and good friend of NACC – Wayne Boys has been busy lately, completing more than 3km of habitat protection fencing on his Chapman Valley share property. Situated among the Moresby Range, Wayne and his partners have owned the property for the past eight years and this new fence will ensure more than 47 hectares of remnant bushland is kept pristine.

While NACC’s Bushcare Officer Vanessa Brown visited the property recently, Wayne explained that he wants to collaborate with all of his neighbours to fence off the remaining vegetation of the Moresby Range. Vanessa said his plan would have a very positive impact on the natural environment in the area.

“Originally the Moresby Range would have had a variety vegetation cover varying across stream zones, faces of the Range and the flat tops,” she said. 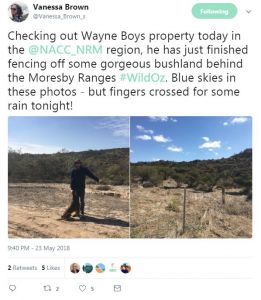 “Today the remnant vegetation is described as predominantly being mixed Hakea and Melaluca thicket with occasional patches of jam scrub and scattered York Gum.

“In the north there are significant amounts of remnant vegetation cover, but in the centre and south native vegetation has been nearly totally removed.”

Wayne believes there is already a flow on effect from fencing and protecting remnant bushland, as he has seen an increase in the number of native wildlife utilising the bushland, in particular Short-beak Echidnas (Tachyglossus aculeatus).

As one of the primary threats to the Short-beak Echidna is habitat loss, especially the loss of fallen logs and tree stumps, protective understory vegetation and the efforts of landholders such as Wayne make a difference to the population numbers of the Echidna and countless other native animals in the Northern Agricultural Region.

The Moresby Range rises over 200 metres and is characterised by distinctive flat mesa tops. The Range runs roughly parallel to the coast for about 33 kilometres, averaging about 6 kilometres in distance from the coast. The Moresby Range was once a seabed built up from sediment deposits over millions of years. Fossils from this ancient seabed can be found in various places in the Range.

Over geological time the sea level has changed a number of times leaving the old seabed as an elevated rocky plateau bordered by the sand plain and dune systems to the west of the Range. This plateau has been eroded by streams following fault lines in the rock, creating the characteristic mesa style, flat top hills. These streams carried the eroded materials from the Range and spread them out across the landscape creating the fertile, undulating, landscape to the east of the Range. The prevailing southerly winds carried coastal sands up against the southern end of the Range forming the expansive sand plains between the Chapman River and Mt Fairfax. .

This project has been supported by the Northern Agricultural Catchments Council through funding from the Australian Government’s National Landcare Program.