Seed was obtained from 26 native species such as Flooded gum (Eucalyptus rudis), Coastal Blackbutt (Eucalyptus todtiana), Sandplain Woody Pear (Xylomelum angustifolium), various Melaleuca species, and the beautiful orange bottlebrush, Eremea beaufortiodes. Provenance seed collecting techniques were used, meaning that the location of collected seed is noted so that during seeding for revegetation, seed containing the genetic material from the local area can be used.

Ian Pulbrook from Greenoil Tree Nursery led the seed collection efforts with a team of local Yued Noongar people employed through this Greenjob initiative. The Greenjobs team processed the collected seed material through various drying, heating, and extractive procedures, enabling the seed to be isolated from its casings and chaff, to be stored for later use with the State Government’s Environmental Revegetation and Rehabilitation program.

“Fred is a stalwart supporter of sharing traditional Aboriginal culture amongst the local community – both Aboriginal and wider community, and this project has achieved both,” said Helen.

“Fred also congratulated Moore Catchment Council on putting together a project which brought local Aboriginal people together to work and learn on country.”

NACC NRM Biodiversity Project Officer Kahree Garnaut caught up with those employed by the project, supporting stakeholders, and local farmers who are working with Moore Catchment Council with revegetation efforts, to celebrate successful completion at the Moora Race Club.

Kahree says Moora’s community went above and beyond to employ local Aboriginal people to get back on country and collect seed, which will later used to heal Country through native revegetation.

“Farmers in the area are working together to create and connect revegetation belts, creating habitat and movement corridors for native wildlife,” said Kahree.

During the course of the event, Greenjobs employees were recognised for their contribution to the project’s completion in a certificate award ceremony, presented by Helen Watkins.

“This project could not have been achieved without the help of the Yued team leaders Fred Mogridge and Julian Ryder; Rachel Walmsley for scoping out the various properties and supervision when needed; Sarah Mason, Wayne O’Sullivan and Richard McDowell for picking and processing training; and especially the help and local seed processing knowledge of Ian Pulbrook,” Helen said.

Than you to Moore Catchment Council for being the driving force behind this project and NACC NRM look forward to supporting the Moore community with more projects in the future!

This project was made possible by the State Governments Greejobs Plan, part of the WA Recovery Plan. 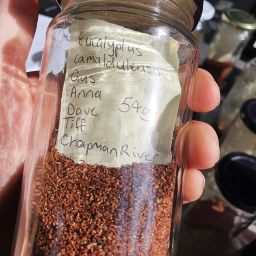 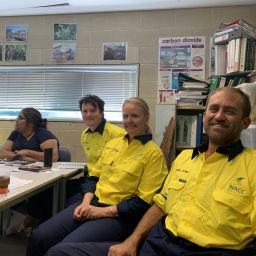 A Seed is a Start 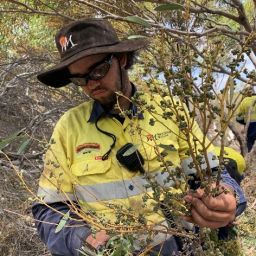 Picking for a Purpose