Love was well truly in the air in Geraldton on Valentine’s Day – love for the beach that is! 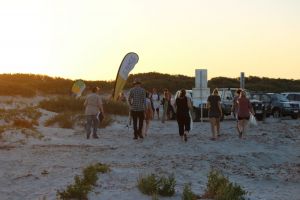 All the loving, for the beach, was at the Batavia Coastcare Network’s very first singles’ event – Love Your Beach.

Organised by NACC, and funded by the WA Landcare Network and Intrepid Landcare, the event invited environmentally-conscious singles under the age of 35 to gather for a beach clean-up in Geraldton.

“Although it was unclear how many people would turn up on Valentine’s Day, we were blown away by the fantastic turn-out,” said event convenor, Batavia Coastcare Network secretary Vanessa McGuiness, who said she said she was “thrilled with how the evening progressed”.

A group of around 20 volunteers gathered at Pages Beach just as the sun was starting to set and immediately set-off with bags and gloves, ready to tackle any plastic debris and other beach rubbish they could find.

After splitting-up into smaller groups, participants then spent the next hour wandering along the beach and through the dunes, picking-up all of the foreign materials that they could find, and recording their origin.

Vanessa said the records will be sent to not-for-profit organisation Tangaroa Blue Foundation who work on solutions to stop the flow of litter at the source.

After the hard work was out of the way, the group of happy singles headed back to Pollinators shared space on Marine Terrace to relax with a few drinks and some well-earned pizza.

Some hilarious entertainment was provided by Jody Quadrio from the Comedy Emporium, who engaged participants in some speed-dating style activities and comical improvisation.

“We would like to thank everyone who came down and helped us clean up beautiful Pages Beach,” said Vanessa.

“Youth in Landcare is so important for the future, and it was great to spend the evening with such a friendly and passionate group of people.”

And was there any ‘true love’ in the air?

“There were definitely a few people that really hit it off,” said vanessa. “And I’m quite sure that a few phone numbers were exchanged by the end of the event – a win for the beach, a win for conservation, and a win for Geraldton’s amazing singles.” 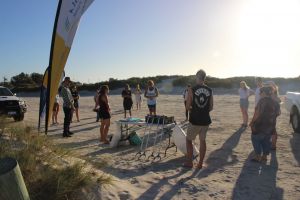 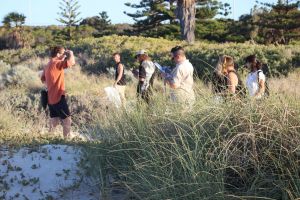 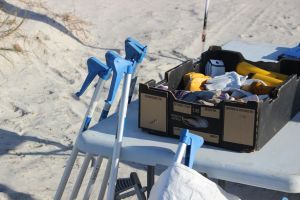 This project was supported by the Northern Agricultural Catchments Council, through funding from the Australian Government’s National Landcare Program. 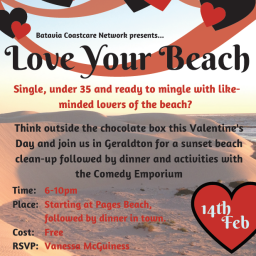 Everything benefits from regular check-ups