The Forum was opened with a keynote address by Stephen Hopper – a renowned conservation expert who believes the key to preserving WA’s threatened plant species lies in bridging the gap between modern, scientific knowledge and that of ancient Aboriginal cultures.

Professor Hopper stated that Australia’s first people have been here 60,000 years, and whatever biodiversity we have is due to their good management.

He then queried “Are there aspects of Aboriginal approaches to caring for country that might help us better do the same?” He said he was increasingly convinced the answer was yes and one such approach suggested, was the adoption of totems – specific species or landscapes to focus our energy and time upon.

Delegates also learned of the latest work being undertaken by the Threatened Species Recovery Hub on assisted migration of our fauna – in particular the Western Swamp Turtle – to help them adapt to drying climates. Up and coming academic Joshua Kestel spoke about how connectivity of threatened ecological communities is reliant upon pollen carryover, and demonstrated the benefit of using a common species like Anigozanthos humilis to help understand the complexities of plant-pollinator interactions. And WA’s Regional NRM groups showcased their work with threatened species and ecological communities supported by the Australian Government’s National Landcare Program.

The second day brought forth more fascinating information, with updates on the Felixer trials being undertaken by Judy Dunlop to protect Quoll populations, further information on fauna translocations in Shark Bay, the study of short-range endemic invertebrates to enhance conservation outcomes and the impacts of cats and their management in Australia. Local Department of Biodiversity, Conservation and Attractions Ranger – and member of the Midwest Aboriginal Ranger Program – Kailah Dodd gave an overview of her work with threatened flora and fauna in the Midwest Region and delighted the audience with her candour.

In addition, this year’s Forum had a specific focus on recovery plans, with many speakers discussing existing recovery plans, threatened species advice documents and how to manage when these are not available or significantly out of date.

The forum sundowner was the perfect opportunity to catch-up with colleagues and old friends, and develop contacts with a range of experts and interested individuals from across WA, and Australia as a whole. And for those looking for some light hearted entertainment they were not disappointed. 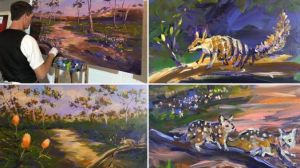 Phil Doncon created not one but two woodland art masterpieces during his unique Paint Storm performance – which were then auctioned off to the highest silent bidder – and local band Fresh and Salty provided the environmentally themed music. And who could forget crowd favourites the threatened animal mascots kindly on loan from Perth Zoo.

“The forum brings together conservation professionals and volunteers to share stories about the latest research and on-ground work that’s supporting the recovery of WA’s threatened plants and animals.”

Dr Box added “It was great to talk to the crowd about how we are tracking with the implementation of the Australian Government’s Threatened Species Strategy and to acknowledge the massive contribution of the WA conservation community to our national effort.”

“Thanks to the marvellous organisers from NACC NRM and to WA’s regional NRM groups and the Department of Biodiversity, Conservation and Attractions for their support of this event.”

NACC NRM’s General Manager Katherine Allen was in attendance at the forum and provided the closing address and said that one of the most important aspects of the WA Threatened Species Forum was sharing stories.

“I implore all delegates to not just share their messages of concern but also their solutions so that the broader community can be made aware of the threats facing our threatened species.”

Mrs Allen concluded the two day forum with a message of thanks to all partners and sponsors.

“This event would not have been a success without the generous support our partners and sponsors have provided. We would especially like to thank Iluka Resources for their financial support and we sincerely hope that this support will continue for future forums – and I am pleased to announce that the 2021 will also incorporate the National Malleefowl Forum.”

This event was supported by NACC NRM, the WA regional NRM groups and Department of Biodiversity, Conservation and Attractions, with funding from Iluka Resources, City of Greater Geraldton, The Gerald Hotel Apartments, National Landcare Program and the Threatened Species Recovery Hub.