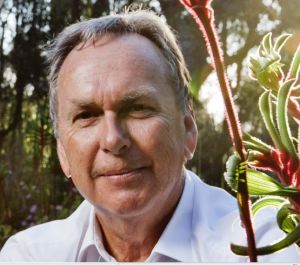 A widely published conservation biologist and teacher, Steve has had an extraordinary life and career on the land – in particular, as the director of two of the most respected gardens in the world – Kings Park and Botanic Garden in Perth, and Royal Botanic Gardens in Kew.

Professor of Biodiversity at University of WA Albany since 2012, Steve has 45 plus years as a conservation biologist and teacher, including 12 years leading Kings Park and Botanic Garden (1992-2004), and six years leading the Royal Botanic Gardens (2006-2012).

An active field biologist, Steve’s research focuses on sustainable living with biodiversity, especially through collaboration with Aboriginal elders. He has also described more than 300 new species of plants, and is globally recognized for his research on granite outcrop plant life.

He developed OCBIL theory , which explores the evolution, ecology and conservation of biological and cultural diversity on the world’s oldest, climatically buffered and most infertile landscapes. These are found notably in 12 of the world’s 35 Global Biodiversity Hotspots, mainly in the Southern Hemisphere.

In 2012, Steve was awarded an AC (Companion of the Order of Australia), the nation’s highest civilian honour, for eminent service as a global science leader in the field of plant conservation biology, particularly in the delivery of world class research programs contributing to the conservation of endangered species and ecosystems.

During his presentation Sacred hills, waters and fire – learning Aboriginal perspectives on caring for threatened species Steve will discuss his work over the past six years where he and his partners have collaborated on a co-learning biodiversity venture aimed at combining oral history of traditional south coast Merningar/Minang Aboriginal culture with western science conservation approaches. Plus, he will share fundamental insights that may held redress the decline of many threatened species.

This will be the third time the WA Threatened Species Forum will be held in Geraldton, with the inaugural event in 2015 bringing together more than 180 people with a common concern for WA’s animals and plants. Registrations will open this June and all the event details can be found here.