Feral pest numbers take a hit, with increase in kills at community shoot 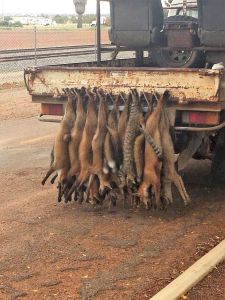 Participation numbers were high with 14 teams registered for the event and 46 people in total. The shooting took place on properties in Mingenew, Irwin, Three Springs and Mullewa, with a total of 287 feral pests being removed from properties.

The Fox Terrier team took out first place for a second year in a row, with a total of 43 foxes, 1 cat and 49 rabbits. There was an increase in pigs, cats and rabbits this year with 177 foxes, 11 cats, 21 pigs and 78 rabbits being shot this year compared to last year’s shoot which had a total of 174 foxes, 5 cats, 25 rabbits and 4 pigs.

Saturday morning the tired and weary shooters arrived at the Cecil Newton Park in Mingenew for a BBQ breakfast kindly donated by the Mingenew IGA, Mingenew Bakery and the Holmes family who donated the fresh eggs. Prizes were kindly donated by Mingenew Landmark and Elders, Dongara Mitre 10 and Batavia Coast Firearms in Geraldton and were given to the first and second placed teams as well as the wooden spoon team.

The event was sponsored by the Northern Agricultural Catchments Council, which is continuing to work on biodiversity and feral management within the NAR. 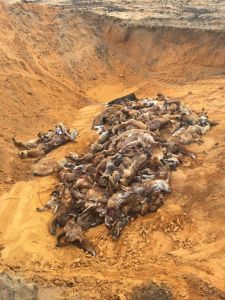 After the event the results were posted on the Mingenew Irwin Group Facebook page as the total kills of the event is always of interest to the community. It not only informs them of how many feral animals were removed but also of the general population size of the animals especially the foxes. The Facebook post went viral, with over 23,000 people seeing the post. Over 1,000 people liked the post and many people congratulated us on the work removing the pests.

The project was a great success with many teams were looking forward to next year’s shoot.

This event is supported by NACC through funding from the Australian Government’s National Landcare Program as part of the Regional Landcare Facilitator project.