It was an early rise last weekend for a group of passionate and dedicated bird enthusiasts from the local Birdlife Midwest-Geraldton group who gathered on our beaches to conduct their annual shorebirds survey – as part of the Australia-wide annual Shorebirds 2020 bird survey.

The survey – conducted at the group’s two long-term registered monitoring sites at Point Moore and Cape Burney – recorded a whopping 466 birds among 16 species of shorebirds. Over 128 sightings and 9 species of other birds (not-shorebirds) were also recorded.

There’s sure to be something in all of this beach wrack – @BirdlifeMidwest-Geraldton birders recording #shorebirds for #Shorebirds2020 pic.twitter.com/5ODHVXAETH

“However, our observations this year showed fewer species and numbers than previously – which is disconcerting. Of course, seasonal changes are partly responsible for this decrease, but this decline also coincides with a nationwide downward trend in species populations, which is a real worry” said Jan.

“We are hoping our new NACC-sponsored signage will help us mobilise more public support, and awareness of the importance of protecting our precious feathery friends along the coastline.”

In addition to the Birdlife Midwest-Geraldton, another group of passionate volunteers are also participating in the Shorebirds 2020 count – conducting their shorebirds count this weekend in Greenhead and Jurien Bay. Anyone who will be in the Greenhead and Jurien Bay area and would like to get involved are urged to get in contact with NACC Coastal and Marine Project Manager Hamish Longbottom on 0448 459 127 or email Hamish.Longbottom@nacc.com.au

Thanks to everyone who came along to today’s @BirdlifeMidwest-Geraldton #Shorebirds2020 count at Point Moore in Geraldton.#shorebirds pic.twitter.com/NhT5LcgJHZ

The annual summer Shorebirds 2020 count aligns with the Wetlands International Asian Waterbird Census (AWC) – a huge citizen science program, conducted in partnership with Birdlife Australia, to support the conservation and management of wetlands and waterbirds. Citizen science involves members of the general public collecting and analysing data on natural resources, frequently as part of a collaborative project with professional scientists.

Information gathered from the AWC will be used to promote the designation and management of internationally important sites such as nationally protected areas – Ramsar sites, East Asian-Australasians Flyway network sites, and key biodiversity areas. This data will also be used to identify and protect new sites of importance for waterbird species.

Anyone interested in joining, or finding-out more about the Birdlife Midwest-Geraldton group, are encouraged to contact Jan Checker on janchecker@westnet.com.au

For more information about Shorebirds 2020, visit the Birdlife website. 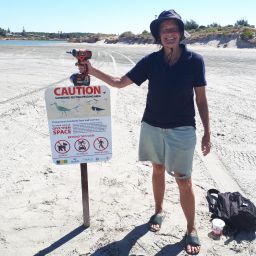