During the winter month across southwest WA the distinct mating call of the Western Banjo Frog can be heard. Commonly known as ‘Pobblebonk’ frogs they make a very loud single ‘Bonk’ that is repeated at intervals and answered by other nearby males.

A large robust ground-dwelling frog reaching up to 7.5 cm in length they can be identified thank to the distinct yellow dorsal stripe that runs from nose to rump hence their scientific name dorsalis. The back colouration is grey or dark green with numerous, irregular dark brown blotches, and their groin area sports bright orange to red patches.

The Western Banjo Frog also has a glandular ridge at the corner of its mouth and large glands on the upper side of the calves. Males have thicker, more powerful arms than females and develop a dark throat as well as nuptial pads during the breeding season. 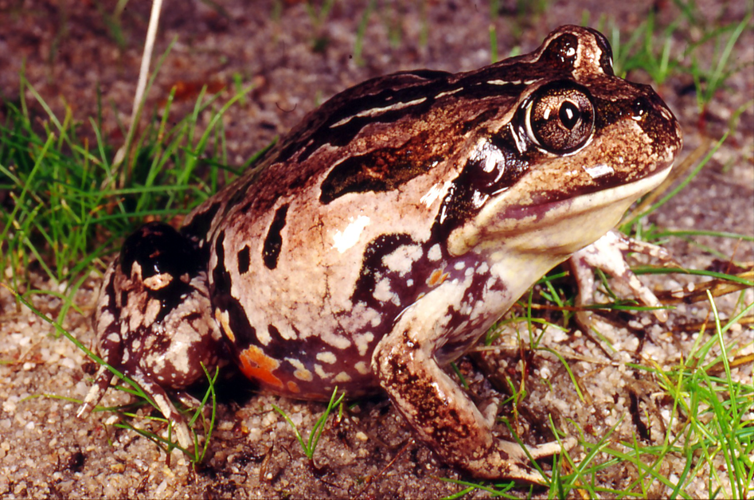 The adult Western Banjo Frog diet includes insects, spiders and worms. In its tadpole form they are vegetarian and consume algae and plant detritus.

Western Banjo Frogs are adept at burrowing and spend much of the year buried in sandy soils away from breeding sites. They are found across the south-west from Kalbarri in the north, throughout the Wheatbelt and south-west forests to Cape Arid.

Breeding begins as early as May in the northern part of their range and continues through to early December.

During mating, the female beats the surface of the water to produce a white foamy mass. The eggs are laid into the base of this foam ‘raft’ which is usually hidden beneath overhanging vegetation. This floating foam nest in open water is unique among south-western frogs.

The tadpoles are relatively large, and can reach 8 cm in length. The back is dark brown, almost black, sometimes with scattered black spots, while the underneath is dark with a blue hue. Tadpoles are usually found in deep, permanent water, and may be present all year round thanks to their slow development. Tadpoles metamorphose into froglets from early summer to April.