Thorny Devils eat ants. In the morning and late afternoon they locate a trail and lap them up with their short, sticky tongues. In one day an individual can eat thousands of ants! This diet seems to suit them just fine: they can live to be 20 years old in the wild.

The Thorny Devil is marred with a wicked common name, and its Latin species name horridus doesn’t seem much better. In reality, it’s a slow-moving ant-eater, and horridus means bristly, referring to the reptile’s erect stance!

The Thorny Devil is a diurnal (day-active) reptile reaching 20cm in length. It’s covered in thorny spines and sports a ‘pretend’ head on the back of its neck, which is thought to warn off predators.

How do these lizards survive in water-parched arid Australia? During the night dew condenses on their bodies, and in the morning they brush up against dew-covered grass. Then the hygroscopic (moisture-attracting) grooves between their scales channel this water to their mouths!

The same process occurs when it rains. Essentially, capillary action allows the lizard to suck water from all over its body – an amazing adaptation! They’re also thought to bury themselves in sand, in extreme circumstances, to draw moisture from it.

Their range covers most of arid Australia – large parts of Western Australia, the southern half of the Northern Territory, South Australia and western Queensland. They live in dry sand country, spinifex grasslands and scrub. 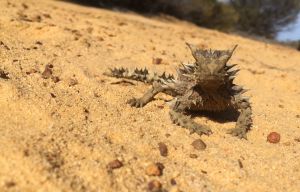 It may be a well-known species, but scientists are still somewhat unsure about its distribution and population size.

We do know that head-bobbing and leg-waving is how a male Thorny Devil attracts a mate. Courtship complete, the female then lays 3 to 10 eggs in a chamber burrowed 30cm deep in the soil. Depending on the temperature, the eggs hatch after three to four months. Young start eating almost immediately.

Natural predators include Goannas and predatory birds like the Brown Falcon. Being entirely reliant on ant populations, the Thorny Devil is vulnerable to habitat loss and disturbance. Being ectotherms (which get their body heat from external sources) they’re at risk of being run over while basking on warm roads.