The term ‘sandgropers’ has a long history as a colloquial name for Western Australians and also denotes some very strange, wholly subterranean insects known to entomologists as cylindrachetids.

Though common in Western Australia, sandgropers are not restricted to the State but occur widely across the Australian continent wherever there are extensive areas of sandy or sandy loam soils 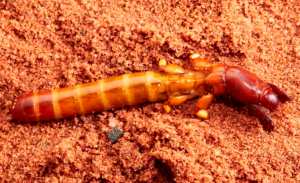 Sandgropers are seldom seen because of their subterranean life-style but are common inhabitants of sand dunes and sand plains including the Swan Coastal Plain. Despite their grub-like appearance, cylindrachetids are believed to be descendants of grasshoppers.

Their bodies are wonderfully adapted for a burrowing mode of life. A tell-tale sign of their presence is a long raised trail across bare sand where one has burrowed just beneath the surface, usually following rain. Sandgropers part the soil ahead of them with breaststroke-like motions of their highly modified and very powerful fore legs and they can run backwards or forward within their galleries on the comparatively tiny mid and hind legs. Their bodies are streamlined and offer minimal resistance: wings are entirely absent and the mid and hind legs recess into the sides of the body.

There is some evidence that the insects may be omnivorous as the intestinal contents of some specimens were found to contain fragments of insects along with plant material. The insects feed near the soil surface only during the cooler, wetter months and retreat to deeper, moister soil (up to 1.9 m deep) during the dry summer months.

The biology of sandgropers was long neglected because of the difficulty in finding and observing them. Like their grasshopper relatives, sandgropers develop gradually from egg to adult (that is, juveniles resemble adults, except for a wholly white abdomen, and there is no larval stage). The eggs are relatively large (up to 7 mm long), white, pink or deep red, and each is laid singly in a separate chamber, suspended from the ceiling. Development from egg to adult is slow and a life-cycle extending over several years is indicated.