The voice of the Sacred Kingfisher is a loud “ek ek ek ek” repeated continuously throughout breeding season. Birds also give a “kee kee kee” in excitement and a series of chirring, scolding notes when alarmed. 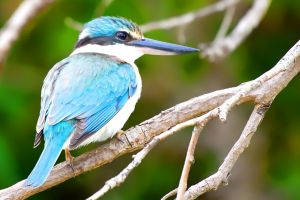 The Sacred Kingfisher (Todiramphus sanctus) is a medium sized kingfisher. It has a turquoise back, turquoise blue rump and tail, buff-white underparts and a broad cream collar. There is a broad black eye stripe extending from bill to nape of neck. Both sexes are similar, although the female is generally lighter with duller upper parts. Young birds are similar to the female, but have varying amounts of rusty-brown edging to feathers on the collar and underparts, and buff edges on the wing coverts.

The Sacred Kingfisher is common and familiar throughout the coastal regions of mainland Australia and less common throughout Tasmania. The species is also found on islands from Australasia to Indonesia and New Zealand. The Sacred Kingfisher inhabits woodlands, mangroves and paperbark forests, tall open eucalypt forest and melaleuca forest. In Australia, Sacred Kingfishers spend the winter in the north of their range and return south in the spring to breed.

Sacred Kingfishers forage mainly on the land, only occasionally capturing prey in the water. They feed on crustaceans, reptiles, insects and their larvae and, infrequently, fish. The birds perch on low exposed branch on the lookout for prey. Once prey is located, the Sacred Kingfisher swoops down and grasps it in its bill, returning to the perch to eat it.

For most of the year Sacred Kingfishers are mainly solitary, pairing only for the breeding season. Usually two clutches are laid in a season. Both sexes excavate the nest, which is normally a burrow in a termite mound, hollow branch or river bank. The nest chamber is unlined and can be up to 20m above the ground. Both sexes also incubate the eggs and care for the young.