Biologically, this species is the largest parasitic plant in the world as it attaches itself to the roots of other plants and sucks their sap. The species is related to mistletoe and is more accurately known as a hemi-parasite because, though they do feed off their hosts, they can also sustain themselves through photosynthesis. 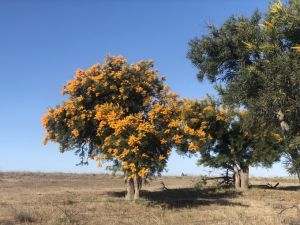 The WA Christmas Tree belongs to the plant family Loranthaceae and to the genus Nuytsia –  a monotypic genus, meaning it only includes the one species.

Named for its prolific flowering throughout early summer the WA Christmas tree is an iconic sight across the Southwest of WA. Flowering from October to January signalling that Christmas is just around the corner.

Nuytsia floribunda is the largest mistletoe in the world. Growing into a 10 metre tree it stands apart from other mistletoes which can be seen as small shrubs attached to the branches of host trees. Nuytsia floribunda is believed to belong to the oldest lineage in its family predating their evolution to aerial parasites and is the only plant in the mistletoe family that has seeds that are wind dispersed.

As a hemi-parasite Nuytsia floribunda can sustain itself using photosynthesis as well as having the ability to parasitise. Using its haustorial roots the WA Christmas Tree can sever host roots and penetrate the tissue to extract water and nutrients up to 110 metres away.

The South West is recognised internationally as a biodiversity hotspot with almost half of its plant species, including the WA Christmas tree, occurring nowhere else in the world.

Nuytsia floribunda prefers to grow in sandy soils associated with underlying granite, laterite and limestone and has a range that extends from Kalbarri in the north to Esperance on the south coast.

The roots of Nuytsia floribunda have also been known to cut through things such as underground electric cables, small water pipes and telephone lines.