The Honey Possum is a tiny marsupial found only in the south-west of Western Australia. This region is one of the oldest parts of the earth and contains a rich variety of nectar-producing plants. When the ancestors of the honey possum arrived, most probably from South America more than 50 million years ago, they found a land of sweet nectar.

Finding a constant source of food as pollen and nectar has resulted, over the ages, in the honey possum slowly losing its teeth, so that today, they are just a few tiny pegs. Its tongue has become specialised to lick pollen, with a brush-like tip at the end, similar to that of a bird. Indeed, today, they are unable to chew the hard outer skeleton of insects, and are the only non-flying mammal in the world to survive on the products of flowers.

Honey Possums are mainly nocturnal but on cloudy days they can be seen visiting flowers from dawn until dusk. They feed on banksias, bottlebrushes, heaths, grass trees and kangaroo paws. 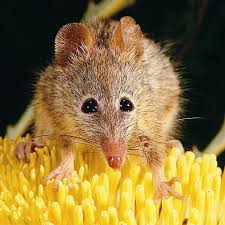 They’re the world’s only truly nectivorous (nectar-eating) marsupial. Because they have such a high metabolic rate, they need a year-round, continuous supply of nectar to survive. And plants need them: Honey Possums pollinate many plant species by transferring pollen collected on their head and body between flowers.

Male Honey Possums are smaller than females, but have extremely large testes (up to 4.2% of their body weight) and the largest spermatozoa of any mammal in the world!

Females give birth to two to three young – joeys – at any time of year, whenever food is abundant. Being a marsupial, the mother raises the tiny newborns in her deep pouch, suckling them until they’re about three months old.

In cold or wet weather they can enter a state of torpor, conserving energy by lowering their metabolic rate and internal temperature. They sometimes huddle together in a cluster to keep warm. In the wild they have quite a short life-span, living 1 to 3 years. 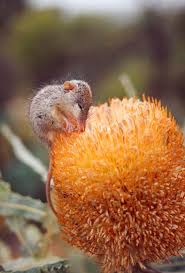 Habitat loss is the biggest threat to the survival of Honey Possums. They rely on a rich diversity of flowering plants so that at any time of year at least one species can supply nectar.

Unlike nectar-eating birds and bats, they can’t fly to different areas to source flowers. Indeed, females with joeys are recorded to move less than 10m over several months! Even brief food shortages can drive local populations to extinction.

Associated threats are inappropriate fire regimes; habitat loss from the water mould Phytophthora cinnamomi; and predation by cats and foxes. It’s also predicted that climate change will result in declining rainfall and increased wildfires in the region, adversely affecting Honey Possums and their habitat.