Legless lizards such as the Common Scaly Foot are often misidentified as snakes. When threatened, the scaly-foot flashes its thick, fleshy tongue, in an apparent mimicry of snakes.

Despite their snakelike appearance legless lizards are more closely related to geckos and share many features with this group.

Some key ways to distinguish between the Common Scaly Foot and a snake are: 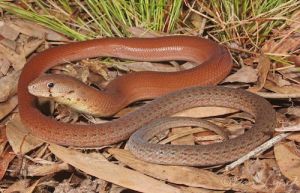 With an average length of 120 mm the Common Scaly Foot are one of Australia’s largest legless lizards and surprisingly their tail can be about three times the length of their body. They have no front limbs and the hind limbs are reduced to paddle-shaped flaps that are held tightly to the sides of the body. It is this feature that is responsible for the lizards name the Common Scaly Foot.

The Common Scaly Foot lizard has a wide colour range and pattern, it occasionally is grey with black spots or sometimes coppery brown with a grey tail. They also have a noticeable “keel” or ridge on the top.

Habitat: The Common Scaly Foot lives in long grasses, heaths, and woodlands, and is most often seen on warm mornings, foraging for food. They are mostly active at dusk or dawn, but are known to be nocturnal after high daytime temperatures.

Threats: General threats to reptiles, and indeed all native wildlife, include: