The bird’s scientific name is Melopsittacus undulatus. Melopsittacus is Greek for ‘melodious parrot’ and undulatus is Latin for ‘undulated’, referring to their scalloped wing patterns.

“The most animated, cheerful little creatures you can possibly imagine.” That’s how John Gould, ornithologist and bird artist, described Budgerigars in the 1800s.

The Budgerigar is a colourful parrot native to Australia. Its plumage is bright yellow and green, with a blue cheek and black scalloping on its wing feathers.  Since its introduction into captivity, the Budgerigar (or ‘budgie’) has been bred into a variety of colour forms, including pure white, blue, yellow, mauve, olive and grey. In the wild, Budgerigars are small green and yellow parrots, with black barring above, and a small patch of blue on the cheek. The male has a dark blue cere (skin at the base of the upper mandible surrounding the nostrils). In the female this is brownish when breeding and light blue otherwise. Small in size, they’re roughly 18-20cm from top to tail, and weigh 30-40 g. Young Budgerigars are similar to the adult birds, but are duller and have a dark brown eye (which is white or yellow in adults).

You may know them as ‘Budgies’, but do you know that the common name is derived from a Gamilaraay Aboriginal language name ‘Betcherrygah’, which is thought to mean ‘good food’? It’s unknown whether this means that the bird itself is good eating, or whether their seed-seeking migrations led Gamilaraay to places of rainfall and abundant food.

The Budgerigar occurs naturally throughout much of mainland Australia, but is absent from the far south-west, the north of the Northern Territory, Tasmania and the majority of the east coast. Budgerigars are highly nomadic. They generally fly north during winter, covering significant distances as they migrate. Flocks follow rainfall and seasonally abundant seeding grasses. Flocks normally range from 3 to 100 birds, but after rainfall can number many thousands! Budgies inhabit savannas, grasslands, open forests, grassy woodlands and farmland. Because they need to drink each day, they’re usually found near water. 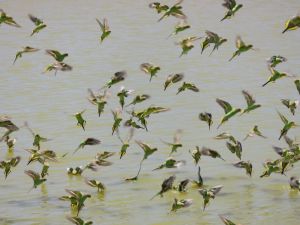 Budgerigars feed almost entirely on seeds, which supply virtually no moisture, so they need to drink fresh water every day to survive. Part of their daily routine is to congregate at waterholes or tanks with other seed-eating birds, such as pigeons, finches and other parrots. Some Budgies hover above the water to drink, and a few may even settle on the water’s surface. So regular are these daily movements that explorers sometimes followed Budgies because they knew they would lead them to water.

This species is abundant due to the availability of artificial water sources for livestock in arid areas. Nonetheless, feral cats predate on budgies, and feral as well as native herbivores may cause local declines in their preferred food source. Introduced pasture grasses such as Buffel Grass and African Love Grass are spreading through much of the Budgerigar’s range, replacing their preferred native grasses en masse. Inappropriate wildfires, often fuelled by introduced pasture grasses, may destroy suitable nesting hollows by burning old trees.