The Budgerigar’s scientific name is Melopsittacus undulatus. Melopsittacus is Greek for ‘melodious parrot’ and undulatus is Latin for ‘undulated’, referring to their scalloped wing patterns.

The Budgerigar is a colourful parrot native to Australia. Its plumage is bright yellow and green, with a blue cheek and black scalloping on its wing feathers. Its tail is slender and dark blue. Small in size, they’re roughly 18-20 cm from top to tail, and weigh 30-40 grams. 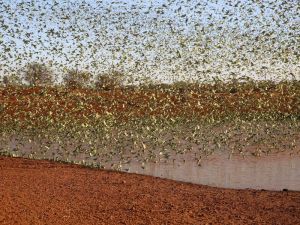 Budgerigars have an extensive natural range – they’re found through most of Australia’s interior west of the Great Dividing Range. They’re not found in Tasmania, Cape York, or the coastal areas of eastern, northern or south-western Australia.

Flocks normally range from 3 to 100 birds, but after rainfall can number many thousands! Budgies inhabit savannas, grasslands, open forests, grassy woodlands and farmland. Because they need to drink each day, they’re usually found near water.

Budgerigars typically drink during the morning, lapping up to 5.5% of their body weight daily! But living in an arid environment they’re very ‘water hardy’. If there’s no standing water nearby, they’ll drink early morning dew and ‘bathe’ in wet grass.

A Budgerigar’s beak and flexible tongue is perfectly suited to its granivorous diet. The bird eats seeds, grains and nuts from native herbs and grasses.

Foraging on the ground, they sometimes climb tussocks to strip the plant. They then de-husk the seed and swallow it whole or broken. After drinking and eating, they seek shade in the middle of the day.

Budgerigars are monogamous and mate for life. Breeding occurs at any time of the year, typically after rain. The nests, sometimes within metres of each other, are made by lining existing cavities of tree trunks, branches, logs and even old fence posts!

Here the female will lay four to eight eggs. The mother incubates the eggs, which hatch after 18 days; the father forages and feeds the chicks, which will leave the nest after another 35 days.